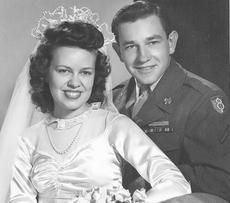 Dennis and Rosemary Butler Dennis and Rosemary Butler are celebrating their 70th wedding anniversary. They were married on September 8, 1945 at the First Church of the Brethren in Detroit, Michigan. The couple has two sons, David (Joyce), Novi, Michigan, and Daniel (Debra), Sandpoint, Idaho. Dennis and Rosemary, who reside in North Manchester, have also been blessed with five grandchildren and eight great-grandchildren. They have been enjoying anniversary celebrations with both their Western family in Idaho and family in Michigan.