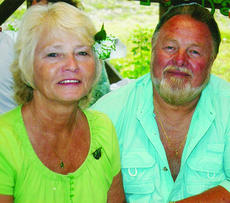 Jerry and Kay (Lipp) Dager The Dagers celebrated their 50th wedding anniversary yesterday, with a family dinner at Biaggi’s. Jerry and Kay graduated together from New Haven High School, and were married a year later, on August 28, 1965, at Grace Lutheran Church. The couple have three sons, Jerry (special daughter-in-law, Patty), Tony, and Bobby, plus six grandchildren, and four great-grandchildren. They are officers in Area Realty Brokers and Allied Economy Auto Parts, remaining active in those corporations on a part-time basis, and spending part of the summer at their home on Big Long Lake, and most of the winter on Terra Ceia Bay, near Palmetto, Florida.