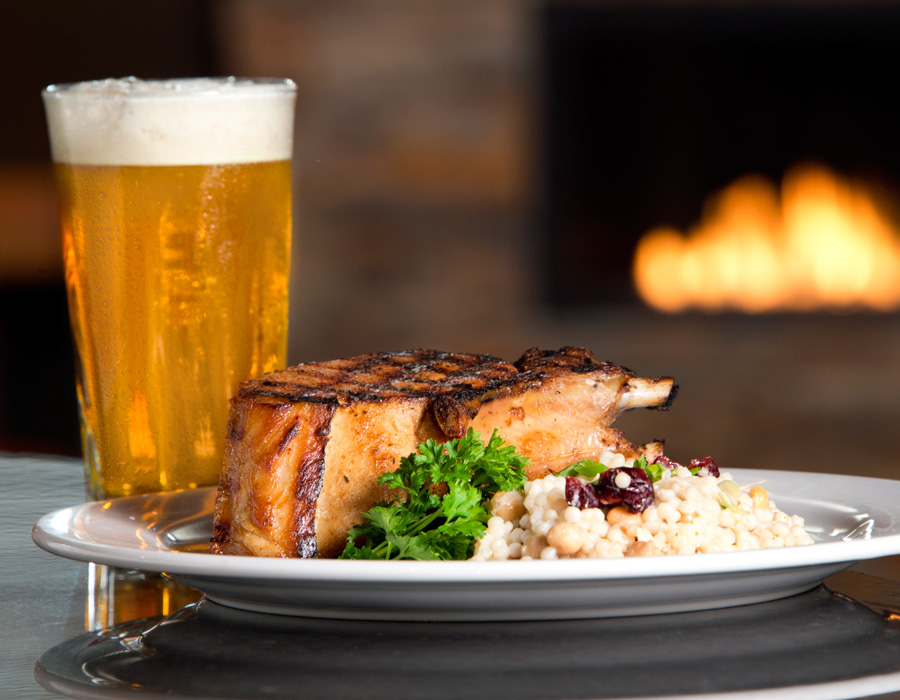 The first thing you notice at the new Black Canyon restaurant on Dupont Road is the enticing aroma of a wood-burning fire. It’s that smoky goodness that makes Ken Davenport, Garrett Hibiske and Chris Bartkus’s new venture so tasty.

Davenport and Hibiske have a decade-long partnership, honed at the Biaggi’s restaurant on West Jefferson Boulevard, where Hibiske was chef and Davenport was management. Davenport, who serves as the Black Canyon’s managing partner, and Hibiske, who is the new restaurant’s chef partner, began talking about opening up their own restaurant about four years ago. Those talks turned more serious with the arrival of Bartkus, who is the silent partner of the trio.

“We couldn’t have done this without Chris,” Davenport said. Bartkus’ involvement led to the July opening of Black Canyon.

Originally, Davenport wanted to open his dream restaurant at the corner of Illinois and Thomas roads, but he realized that the northwestern side of the city was lacking in fine dining options. The opening of the half-billion dollar Parkview Regional Medical Center east on Dupont Road was another factor. All those doctors and other medical professionals need a great place to eat, after all.
Both men are quick to point out that their time at Biaggi’s was great.

“Biaggi’s was the greatest experience in my entire career,” Davenport said. “The only thing better than working at Biaggi’s would be running my own restaurant.”

And so Black Canyon was born. The space it occupies was originally the Oyster Bar’s north restaurant, but you won’t see any semblance of that restaurant in the Black Canyon. The entire space was gutted and opened up to have an open floor plan, one that also includes an open-to-the-dining room kitchen.
“One of the advantages of running your own restaurant is that we can do whatever we want,” Davenport noted. That includes everything from the name of the restaurant – ”Black Canyon” reminds Davenport of Dennison, Colorado, where he’d been on trips – to the décor, which is, naturally, black with stone and wood accents.

An expansive outdoor patio features a large fireplace, while the indoor space is designed to feel both large and intimate. Each table is round to seat a maximum of eight people, while booths are raised. The restaurant doesn’t take reservations, and if large parties come in, they are broken out into separate tables.

“The largest party we can accommodate is seven to eight people.” Davenport said.
The no-reservations policy “wasn’t to be a jerk,” Davenport said. “It’s that parties of a certain size have a negative impact on the overall experience, from overloading the kitchen to noise levels.”

Hibiske created the menu, which he continues to tweak based on customer feedback. It offers diners some unique twists on classic American dishes. Perhaps the most unusual item on the menu is the bao, steamed buns stuffed with Asian barbecued pork with hoisin and oyster sauces. Then, there’s the Beeramisu, Hibiske’s take on the classic tiramisu but made with Guinness and Bailey’s Irish Cream for a sinfully delicious end to the meal. The recipes are all custom, even down to the bread used for cheeseburgers, which is baked by Scholar’s Inn Bakehouse in Bloomington.

But Hibiske puts his own spin on each dish. For example, he uses a 10-ounce “tri-tip” cut of sirloin, which is not often seen in these parts, and he marinates the meat to bring out its unique flavor and texture and smokes it over the aforementioned fire. The burgers are ground fresh in-house every day, using high-quality beef. And the B&B Burger features an equal blend of ground chuck and ground bacon for the ultimate bacon burger.

“Garrett and I are having the time of our lives,” Davenport said. “We couldn’t be happier with how it’s come out.”