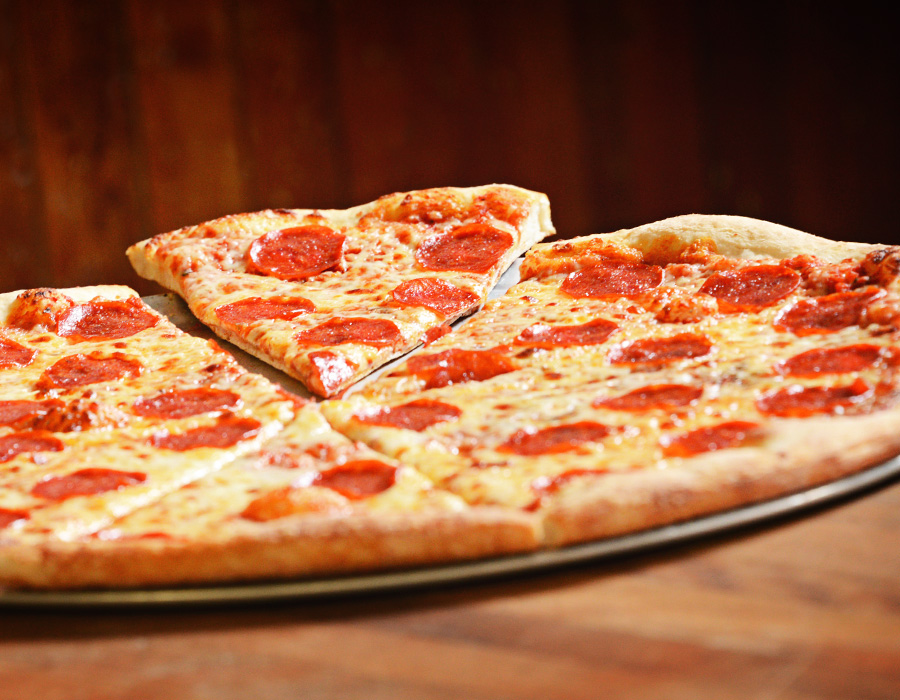 Growing up in New England, I became used to a certain style of pizza. The “New York style,” as developed by Italian immigrants who settled in The City (as we called New York City), comes with a thin, crispy crust, with not a ton of sauce and sprinkled with delicious, fresh toppings. The crust is thin enough to fold in half, which is the accepted way of eating a slice as you walk through Times Square.

You don’t see that style much in the heartland. I’m happy to report that real New York-style pizza has come to Fort Wayne, housed in Big Apple Pizza on Wells Street. Co-owners Chad Castator and Patrick O’Sullivan have developed their pizzas to reflect the New York style, complete with foldability.

The pair met while working together at Club Soda, which bought Richard’s Bakery several years ago to provide a space for the restaurant to prepare food for catering as well as to provide breads for the restaurant. That venture didn’t work out, but Castator (who was running Club Soda’s catering side) saw the location’s potential. He and O’Sullivan, a New Hyde Park, N.Y., native, thought it was time to bring a taste of the Big Apple to the Summit City. They purchased Richard’s Bakery and decided to open what they’ve dubbed a “bakearizza” – a bakery that sells pizza.

O’Sullivan said cooking pizza New York style means the dough is cooked on a stone, rather than in a pan. “That’s how you get that thin, foldable crust that’s different from everybody else,” he said.
Gathering recipes from O’Sullivan’s friends in Long Island and New York City, he and Castator developed a list of pizzas named after New York City landmarks and boroughs. For example, the Manhattan is a Neopolitan pie that reminds me very much of the slices of cheese pizza my friends and I used to buy at our local mall in the 1980s. It’s thin, not super-cheesy and has a crunchy crust that folds properly. The Queens, aka Grandma, is a thin, square crust with chunks of tomato and basil and mozzarella and is, indeed, like the pizzas my Connecticut friends’ grandmothers used to give us as after-school snacks. The Long Island is a white pizza (no tomato sauce) topped with big spoonfuls of ricotta cheese, Parmesan and mozzarella for a delicious cheese infusion.

Big Apple Pizza does offer some deep-dish pizzas, in deference to Midwestern tastes, but with a New York twist. One such pizza is the FDNY, which combines shredded chicken with Buffalo sauce and a drizzle of House Ranch on a thick crust. (Buffalo sauce was, as everyone knows, invented at the Anchor Bar in Buffalo, N.Y., and can be spicy enough to call out the fire department.)

Then there’s the Bronx. It’s a deep-dish pizza with Parmesan and ricotta cheese, tomato sauce – all pretty standard on pizza. But the Bronx features baked ziti (penne pasta) mixed in the tomato sauce and baked on top of the dough covered with cheese.

And let’s now clear up one misconception: Big Apple Pizza does NOT, in fact, sell an apple pizza. But never say never.