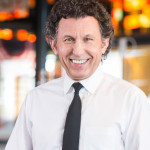 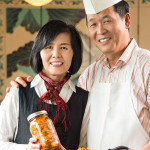 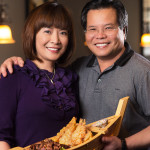 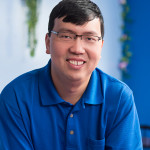 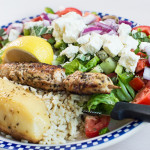 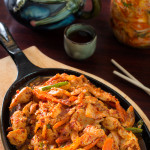 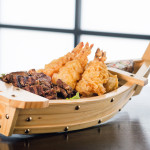 Combination dinner of Teriyaki Steak and Shrimp and Vegetable Tempura with sushi rolls from Asakusa, photography by Neal Bruns

When you walk into the Liberty Diner on Goshen Road, you will be greeted – immediately – by Lady Liberty.

Owner George Smyrniotis chose that replica of the famous statue along with all the American flag bunting and the many photos of New York City to make a point. They’re his statement of what America stands for, as embodied in the poem inscribed on the plaque the Statue of Liberty holds: “Give me your tired, your poor/Your huddled masses yearning to breathe free.”

Breathing free – and the opportunity to chase that fabled American Dream – is what motivated Smyrniotis and the three other Fort Wayne restaurant owners profiled this month, each of whom chose the hospitality industry as the vehicle to chase that dream. Whether their new lives came about because of political turmoil or a lack of economic opportunities in their native lands, these restaurateurs have grabbed hold of the promise America offers and are achieving it with strength, determination and skill in the kitchen.

George Smyrniotis
A journey to America is often punctuated by stops in other locales, as getting to the United States legally requires much paperwork. For Smyrniotis, that journey began when he left Greece as a young man to play soccer in Italy. There, he began working in restaurants to supplement his income and later found himself in Toronto, Canada, where he joined up with his brother and eventually owned successful restaurants. America was still in his sights, and, after selling his Canadian business interests, he went to New York City and then Chicago before finally landing in Fort Wayne in 1999. He bought the former Azar’s building at the Goshen Road/Coliseum Boulevard/Interstate 69 intersection from Alex Azar, and on June 1, 2000, Liberty Diner opened its doors.

It has been packed ever since. Just try to get a table on the weekend – you’ll be waiting in the diner’s lobby, where George’s wife, Elena, will offer smiles until a table can be cleared.

“Everything came together as we expected,” Smyrniotis said, and he is “very proud” of his children. Daughter Elena is a professor of international relations, son Peter is a patent law attorney and daughter Tiffany (who inherited her father’s love of travel) is teaching in Dubai. All three have college degrees, which is part of the reason Smyrniotis has worked as hard as he did and continues to do.

Everyone wants their children to do better in life, Smyrniotis said, and getting his children a solid education and a good start in life was the goal. His two daughters are engaged to be married, and Smyrniotis is hungering for grandchildren.

Liberty Diner, which reflects the menu size and overall look of New York’s ubiquitous all-night diners, hasn’t always been the pot of gold at the end of the rainbow. The Great Recession hit the pockets of his customers, and business slowed. But Smyrniotis and his staff of 32 held on, and the customers returned, eager for the diner’s creamy avgolemono (egg-lemon-chicken soup), Cobb salads (which Smyrniotis makes himself) and hearty rib eye steaks.

He said the positive feedback from his customers keeps him coming to work every day. And those customers stop by from all corners of the country, thanks to the restaurant’s location by Interstate 69.

“A lady from Boston, she’s a chef, she said this is the best place (she) ever ate. She said, you belong in a big city,” he said. “I belong where I am. I have big roots here, and I’m going to stay.”

Myung Sook Jung
If you blink as you’re driving west on Coliseum Boulevard, you’ll miss the tiny Korean-Chinese restaurant called Seoul Garden. Its nondescript exterior, tucked beside a gas station, belies a cuisine that’s heady with spices and traditional Korean and Chinese foods, overseen by Myung Sook Jung and her husband (who serves as chef) Jung Hyo Joung. The couple came to the United States from Seoul, South Korea, on June 6, 2000, and bought Seoul Garden, which has been in business for 32 years, from its previous owners about 10 years ago.

Aided by translator and friend Chin Dailey, Jung described how the Seoul Garden has helped her family grab a piece of the American dream. Education, she said, is the key to making that dream come true.

“In Korea, kids have a hard time to (be able to) study,” she said. “Here, you don’t have to worry about kids studying and (getting) an education.”

Thanks to Seoul Garden’s dedicated customers, Jung and her husband have been able to provide an education for their two children. Their daughter is studying pharmacy at Purdue University, and their son is an engineer working in Detroit.

The tiny restaurant is often packed with factory workers, students from nearby colleges and other people of Asian descent, Jung said. Though many Midwesterners have never heard of kimchee, Korea’s national dish, the restaurant’s customers have come to enjoy the spicy fermented vegetables Jung prepares by hand. The restaurant sells kimchee by the jar, and Jung said she enjoys sharing the foods of her native country and getting people interested in dining outside their comfort zones.

Stretching outside that comfort zone means introducing Midwesterners – not known for their love of all things spicy – to foods with names like “bibimbap” (rice with sautéed and spicy mixed vegetables), “bulgogi” (grilled marinated meat) and “jap chae” (noodles with vegetables and beef).

While Jung is too busy running her four-person team to contemplate expanding Seoul Garden, she does dream of a day when she can renovate the building and make it more to her liking. She credits her customers and the Korean-language services at First Presbyterian Church with helping her learn English and make her restaurant a success.

“Right now she is happy with what she has,” Dailey said of Jung. “It’s a handful, but she’s glad how she has made (the restaurant successful) and how she’s handled” her transition to American life.

That the couple was able to convince skeptical Midwesterners that, yes, indeed, you can eat raw fish and enjoy it is a testament to Chiang’s gracious sociability and the care she takes in picking her staff. A native of Taiwan, the autonomous island region of China, Chiang first came to the United States to join her husband in 1990. He had left Taiwan earlier to work at a relative’s restaurant in West Lafayette, and Chiang joined him there, where he was cooking Chinese and Japanese foods.

Chiang met her husband when she worked as a singer in Yi-Kuang’s brother’s restaurant in Taiwan. Building a life in the United States, a destination Chiang had envisioned since she was a child, was the couple’s dream.

Even something as simple as America’s commitment to having a school bus for every schoolchild showed Chiang life in America would be very different. She was 28 years old when she arrived in America, and the couple’s only child, Andy, was born here. He is now studying information technology in Chicago.

It wasn’t always easy, Chiang admitted. In the early days, “not many people (could) handle the raw fish” aspect of sushi, she said. “Some people were afraid of it. We tell them to try the salmon or tuna,” which has less of a “fishy” flavor. A number of the maki rolls are deep-fried, something she said Midwesterners love. The West Jefferson location also features foods cooked hibachi-style, bringing in a new set of customers.

“We have to introduce people to the food,” she said. “Now I’m so happy that people can accept Japanese food.”

Chiang credits her staff of about 35 with helping build the business to the point where Asakusa could expand from the original Lima Road restaurant to the West Jefferson location in 2013.

“I appreciate my employees. They are very important to me. They eat my food so they can explain it to the customers,” Chiang said. “We are like a family here.”

“When you live here, it’s better,” Chiang said. “Now this is life! This is my dream.”

Toan Ngo
Tucked at the end of an awkwardly situated strip mall behind Casa Grille on Dupont Road is Kim Vu Vietnamese Cuisine. Owned by the Ngo family, the tiny restaurant has been open since June 2012. Toan Ngo is the “face” of the restaurant, while his three sisters, Hang, Dung and Anh, prepare delicious and authentic Vietnamese dishes, such as Viet sandwiches stuffed with pickled vegetables and flat rice dumplings wrapped in banana leaves, as well as pho, the flavorful beef broth with meatballs and noodles that’s as individual as the family who makes it. Smoothies and bubble teas round out the menu, which also includes a handful of “Americanized” Chinese dishes such as General Tso’s chicken.

Toan Ngo is the only member of the family who is conversant in English, so he is the person diners see when they place their orders. That said, Ngo said he doesn’t cook at all – he graduated from Indiana University-Purdue University Fort Wayne with a degree in accounting. Indeed, getting that degree was the reason Ngo’s parents brought their children to Fort Wayne in 1997.

“We picked this place because we have relatives here,” Ngo said. “Our relatives (could) help us out. There are more opportunities here. Getting an education is easier than in Vietnam,” where he and his sisters were born near Saigon. The Ngo family emigrated to Fort Wayne when Toan and his sisters were young children, and the family’s Buddhist heritage is on display in the restaurant, where a Buddhist shrine sits near the cash register to bring good luck.

After a slow start, business is “much better,” thanks to word-of-mouth recommendations and glowing reviews on social media sites like TripAdvisor and Yelp.

“Our food is different” from what most Midwesterners are used to, but younger, adventurous diners have spread the word that Kim Vu’s pho is top-notch.

“People get more used to the taste,” Ngo said. “And people moving (to Fort Wayne) from other places, they’re looking for the kind of food they had” in other cities.

The Ngo siblings have worked hard to build Kim Vu’s success and they’re proud of what they’ve been able to accomplish. While their parents are no longer alive to see their children’s success, Ngo thinks they’d be happy.

“That was the intent of our parents,” Ngo said. “People like our food.”

First appeared in the January 2016 issue of Fort Wayne Magazine.