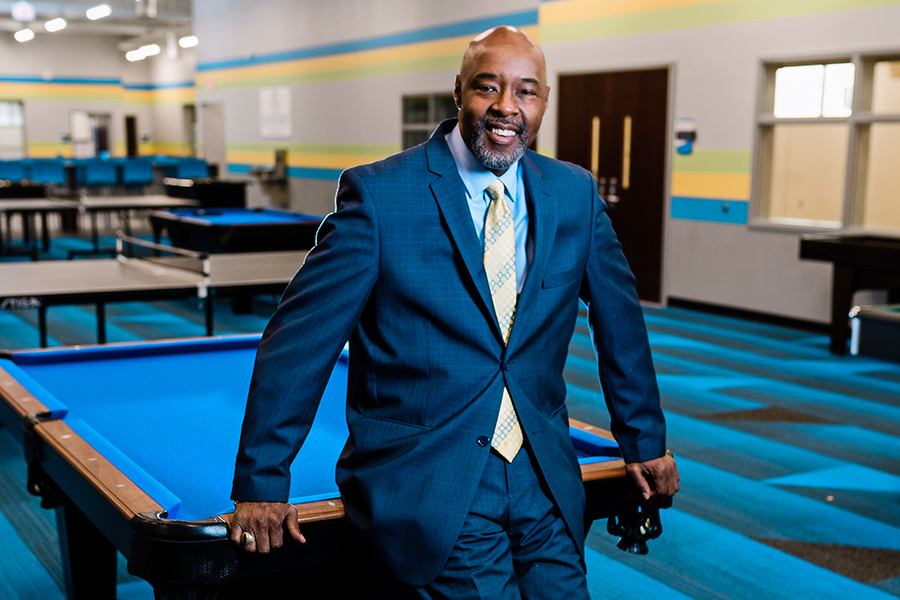 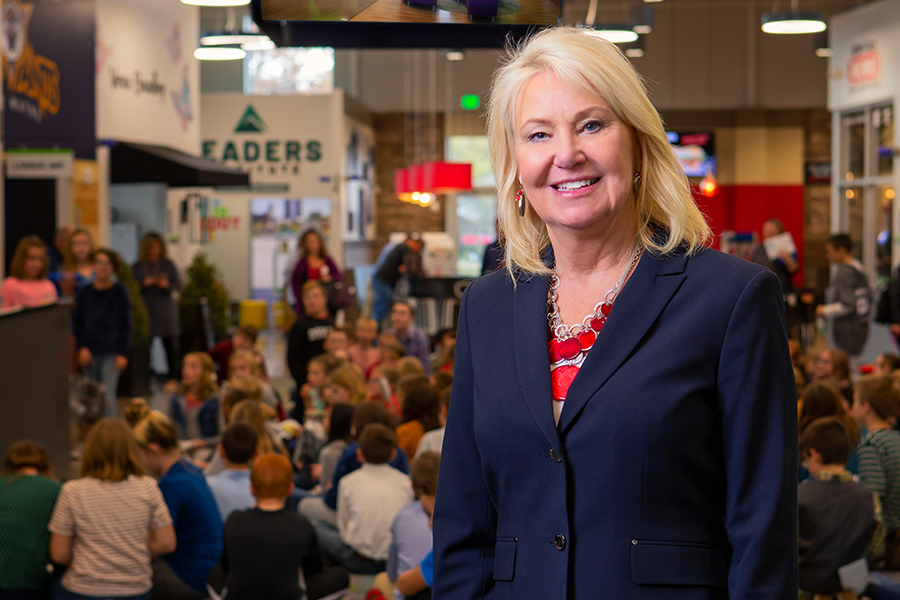 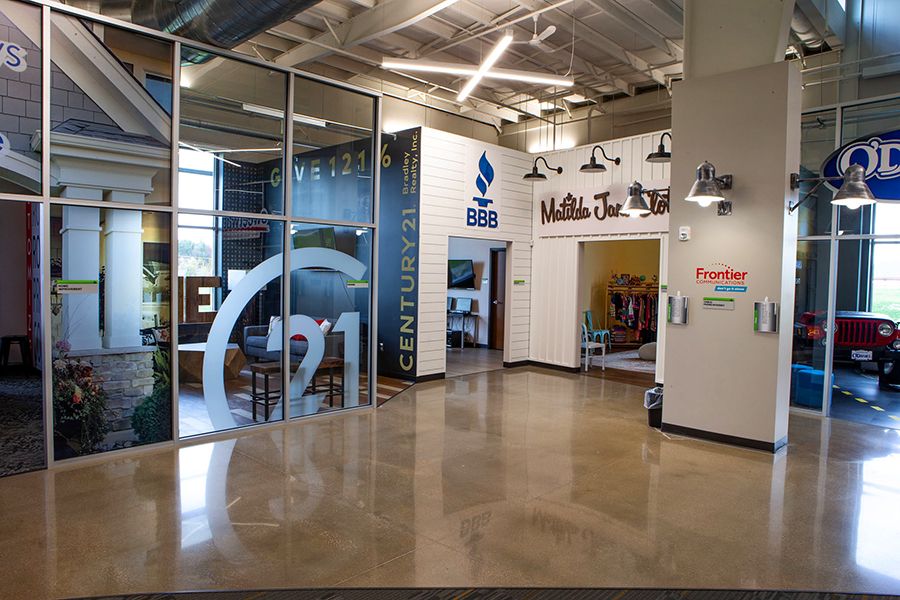 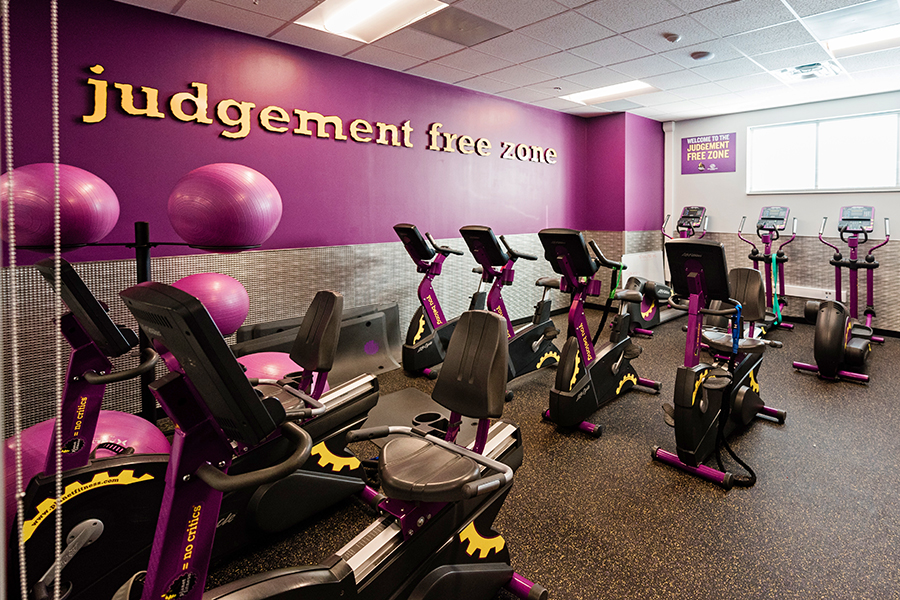 A Planet Fitness is located on the second floor of the Boys and Girls Club.

When Joe Jordan, president and CEO of the Boys and Girls Clubs of Fort Wayne walks the halls of its new facility, kids treat him like a celebrity. The Boys and Girls Clubs of America, with chapters in all 50 states, provides affordable afterschool programs for young people ages 6-18. “We intentionally put ourselves in underserved communities where kids can have easy access to us,” said Jordan.

This past spring, The Boys and Girls Clubs of Fort Wayne opened a new building at the corner of Pontiac and Fairfield that expanded the facility’s footprint to a total of 42,000 square feet. But, this isn’t the only local youth development organization that has recently expanded its facility. Junior Achievement of Northern Indiana, an organization dedicated to educating students about future career possibilities and fiscal responsibility has also inaugurated a new campus at the corner of Coldwater and Wallen Roads.

These expansions were intentional because both organizations required more space to be able to serve the number of young people coming and using their facilities. “At the old location, we were maxed out,” said Jordan. “We couldn’t fit one more kid in there. So, we knew we needed more space to meet the demand.” Each day over 500 low-income school aged children benefit from the club’s programs and services. In 2019, more than 3,000 children were served by its four sites. But, Jordan didn’t just want to meet demand; he wanted to exceed it. He wanted the organization, which has consistently earned accolades for excellence, to do everything better than it had done before.

One age group that Jordan felt was underserved by Boys and Girls Clubs of Fort Wayne was teenagers. “We were not serving older kids. That 13 to 18 group. We missed it,” said Jordan. Of the thousands of kids that the organization served annually over the last five years, 80% are 12 and younger. “We knew we weren’t doing a very good job of tracking and keeping the kids at the organization as they move into their teenage years. And we certainly weren’t attracting older kids to get involved.” So the new building was, in part, an attempt to address this problem.

The Boys and Girls Clubs of Fort Wayne now has a second-floor teen center with a dance studio, online gaming room and a Planet Fitness health club. The building’s other additions include a stage, commercial kitchen, gymnasium, tutoring room and a room devoted to learning about skilled trades. A capital campaign under the direction of Sweetwater Sound’s Chuck Surack swiftly raised the $11 million needed for the construction of the new building. “It was incredible to see the community really buy into our vision,” said Jordan. “And it really doesn’t hurt to have someone like Chuck Surack in your corner.”

The Boys & Girls Club of Fort Wayne was started in 1989 by a small group of community leaders who felt the city needed a safe, accepting and positive place for children and teens to go after school and in the summer. Its structured programs focus on positive behaviors that nurture the children’s well-being, teach them how to set personal goals and choose healthy lifestyle habits. The club believes all kids deserve the same opportunities to succeed in life, no matter their zip code.

The club creates a setting for youth that is a safe, fun after-school experience provided by caring mentors in a positive learning environment and thus made saying goodbye to its outmoded and inadequate old building difficult. “I had mixed emotions about it,” said Jordan. “A lot of miracles happened there. Even though it wasn’t the best building, every day a little miracle happened.”

It might be said that the Boys and Girls Clubs of Fort Wayne needed a bigger building because it needed a larger space for more miracles to happen. Creating more space for miracles was also a motivating factor for building the new Junior Achievement headquarters as well. “Honestly, with the new building, the vision was, ‘What more can we do?'” said Junior Achievement President Lena Yarian. “We didn’t want a new building for the sake of having a new building. The new space is giving us amazing opportunities to deepen our programs and increase our visibility, which hopefully will help to increase the importance of our volunteers and the volunteering aspect of what we do.”

This makes Junior Achievement of Northern Indiana the seventh-largest operation in the nation and the first in student market penetration for all U.S. Junior Achievement programs. Its programs focus on three pillars: Workforce readiness, entrepreneurship and financial literacy. “Our programs begin in preschool and continue through high school,” said Yarian. “It is important to start with the youngest age possible, so our fundamental principles may be ingrained in the children.” Junior Achievement is the world’s largest organization dedicated to educating students about entrepreneurship, work readiness and financial literacy through experiential, hands-on programs. The northeast Indiana chapter of Junior Achievement began in 1952.

The new campus, which cost nearly $13 million to build, was funded through the Casting A Vision campaign. At the campus all of Junior Achievement’s offices and program are under one roof where they were previously scattered throughout the area. Each year Junior Achievement must secure over $3.6 million in support for its programs.

The expansion of its campus allowed Junior Achievement to enrich its two interactive tenets of its programming – Biz Town and Finance Park. “We now not only serve more kids in a given day, but also to spotlight more businesses in the region,” she said. “As students explore these exhibits, they will recognize the tradition of creativity and innovation within their community and strengthen their sense of regional pride.”

The Junior Achievement programs help prepare young people for the real world by showing them how to generate wealth and effectively manage it, how to create jobs which make their communities more robust, and how to apply entrepreneurial thinking into the workplace. “Students put these lessons into action and learn the value of contributing to their communities,” said Yarian. The new facility also includes a new entrepreneurial center where young people can interact with successful local entrepreneurs. “We really strengthened our programming under that umbrella,” said Yarian. And looking to continue to build on its success, in the next 10 years, Junior Achievement of Northern Indiana plans to continue expanding its programming, developing more entrepreneurial initiatives and experiential workforce and financial literacy programming.

Both Boys & Girls Clubs of Fort Wayne and Junior Achievement of Northern Indiana are focused on inspiring young people to reach their full potential. “We want to expose children to opportunities. They have a limited perspective and they need to see the world differently,” said Jordan. “We want to inspire them to be great.” Bgcfw.org; Jani.org