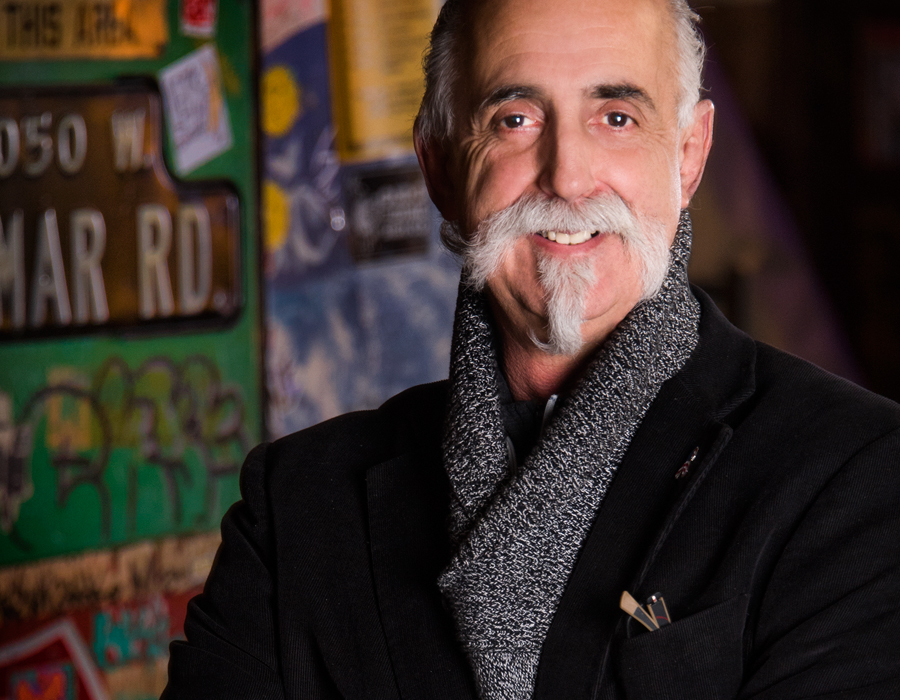 There’s a motto the good folks at O’Sullivan’s Italian-Irish Pub live by: “Never let the struggles of life interfere with the pleasures of living.” If you grew up here, you’ve probably spent a St. Patrick’s Day there. You’ve probably quaffed green beers and maybe left a bra on the ceiling. But not everyone knows the man behind the bar. Frank Casagrande comes from an Italian family and grew up in Scranton, Pennsylvania – where he learned to root for the Steelers. He earned a civil engineering degree at Penn State, also partly owns Paula’s on Main, serves on two city boards and is a race car driver, to boot. He owns the bar with Tom Sokolik, who bought out original partners Todd Davis and Phil Conrad. Now, find out what thrills him and what he’d be doing if he didn’t own a bar as he plays 20 Questions.

1. Did you expect O’Sullivan’s to become the St. Patrick’s Day staple it’s become?
This was a place for the rugby team. I played at Penn State, and we have a great rugby team here, and that’s what the place was built for. We just wanted a place where everybody was welcome, and that’s what it became. Me and my original partners, we played rugby over in Ireland and Wales the year before we opened, and the whole spirit of a pub over there is that it’s a village, it’s a place to gather, and that’s exactly what we wanted. But to answer your question, I had no clue.

2. How’d you get into rugby?
At Penn State. It was a club sport, and I thought that was the way to go. It was the camaraderie. Most of my best friends have been involved in rugby. It’s the only sport in the world where the home team throws a party for the away team afterwards.

3. What drew you to racing?
Love the camaraderie there, and the wonderful people who race. In racing, we have an ambulance and a safety crew standing by, there’s a roll cage around me and a helmet, and I can take the hits like I could in rugby. I played rugby for 29 years but probably should’ve only played 10.

4. What’s it like behind the wheel of a race car?
I always tell people I’ve never done heroin, because speed is the greatest addiction I’ve ever had. There’s nothing like it. You get 20 cars on the track, side by side, the thrill is overwhelming. Taking that car into the corner, making sure she’s going to turn while having guys on both sides of you, there is just nothing like it.

5. The day after St. Patrick’s Day, what are you doing?
Getting the green color out of my brain, putting the place back together, cleaning the neighborhood, taking the tent down and planning a vacation.

6. What happened to all the bras on the ceiling?
The chandeliers were falling down, so when we replaced those we decided to donate the bras to Victoria’s Secret’s research program. We still get a few up there.

7. If you weren’t running restaurants, what would you be doing?
I always wanted to be a cowboy. I worked the stables in the Pocono Mountains when I was a kid. I was a child of the ’60s, and all the cowboy shows had the open range of Colorado and Wyoming, and I love horses.

8. Best movie or TV cowboy?
My favorite show was “Wagon Train.” By far. And then of course, there was John Wayne. John Wayne’s the man.

9. What it’s like to be on the city’s public safety and fire merit boards?
It has been an honor and privilege and I want to set an example for my sons. The Board of Public Safety is a three-member board appointed by the mayor to administer discipline and adopt rules for our police department, along with giving our citizens a chance to be heard if they feel unjustly treated. The fire merit commission is a five-member board. The last nine years I have observed both departments on the cutting edge of not just being the best in the state, but doing all they can to be ranked with the best in the nation.

11. C’mon.
I can tell you right now, there’s no sugar in it, and you start out with pork ribs. After that, I’m not gonna tell you another damn thing.

12. What’s your favorite food you make here?
Probably our stuffed shells. It’s our family ravioli recipe. But I think the key to it all is our sauce. And our pizza. Not to brag, but to me it’s a lot like the pizza on the East Coast where I grew up with a lot of Italians.

13. After you studied civil engineering, how did you end up here?
Shell Oil gave me a choice: NYC or Fort Wayne. Pay was the same. I thought they said Fort Worth. (Laughs.) That was 1975, and not a day goes by I regret staying here. I love this town. I can’t stress it enough. You hear it a million times. When you have a family, there’s nothing like this city. And just look at where we’re headed. Can’t say enough about what our city has done.

14. How much green food coloring do you use to make all the green beer on St. Patrick’s Day?
People ask me where I get it. I tell them it’s a 55-gallon drum that we get from County Cork, Ireland. Usually they believe me because they’ve already had a few of them.

15. How much preparation goes into Saint Patrick’s Day?
Our staff is our family. Without them and their dedication and loyalty throughout the whole year, we are just another pub. They, and our manager and leader, Floyd, make sure everyone’s position is in place and everyone is on the same page.

16. When you’re not at one of your establishments, what are you doing?
I’ve had seven German shepherds over the last 34 years, and if I’m not here or at Paula’s, we’re running the trails at Franke Park.

17. One of your sons moved to Seattle and roots for the Seahawks. As a die-hard Steelers fan, what’s that like?
We all make mistakes in life. I always believe there is hope for change. I’m  just glad he’s happy, and he’s off the hook for giving us our first grandchild.

18. Do you ever use your engineering knowledge today?
Absolutely! For fluids (in racing cars) and in taking care of the buildings we own.

19. It’s 1978. Do you remember that first night you opened O’Sullivan’s?
I do. My original partner and I were bartending, and we said, ‘Well, can’t wait ’til rugby season starts, because we don’t have any customers.’ I remember it like it was yesterday. We were just laughing.

20. What makes a good bartender?
The ability to converse. It’s not about you; it’s about them. Without them, we’d have no business. And don’t get stuck on serving just one. We need to make money.