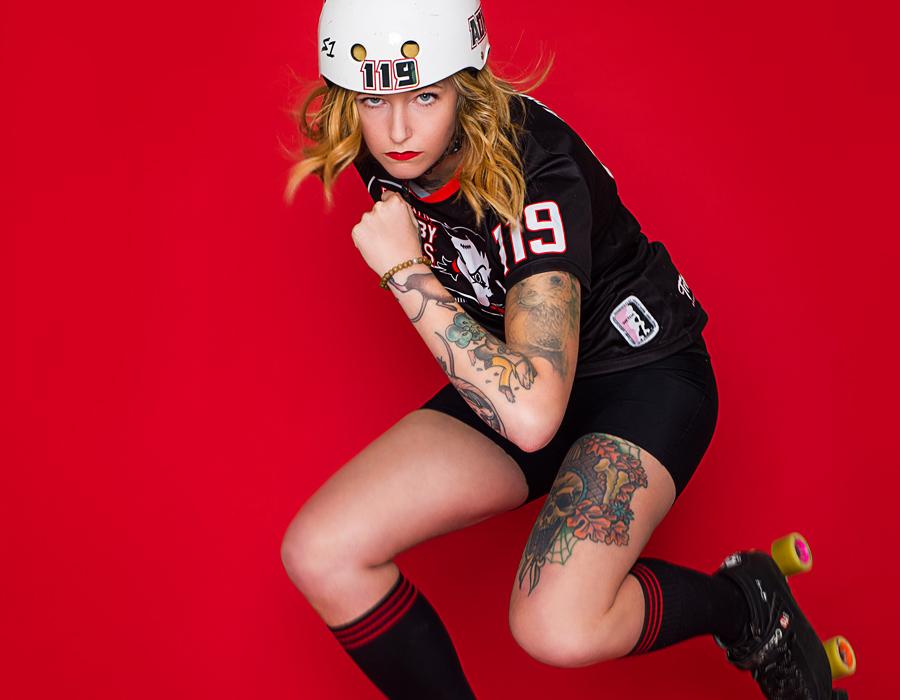 By day she’s Kellie Adkins: the 26-year-old outdoor recreation coordinator for Fort Wayne Parks and Recreation. But by night she’s Kellie Adkins – formerly The Adkins Riot – a tall, lean, tattoo-covered skating machine who serves as president of the Fort Wayne Derby Girls. Off the track, this Fort Wayne native loves animals – especially her cat and dog – and has a long history of volunteering at places like the Fort Wayne Children’s Zoo, Black Pine Animal Sanctuary and even the North American Freshwater Turtle Research Group. Also, this outdoor enthusiast loves her some Dungeons and Dragons. Find out what character she currently plays, her dream vacation and her favorite moment as she plays 20 Questions.

2. What’s your first memory of skating?
There’s this one photo of me as a kid. I’m on my skates and I’m skating down the hallway of my house. I had to be about maybe 6 years old. I have this rainbow animal print bathing suit on and I’m really enthusiastic with my arms up in the air. That picture kind of defines the rest of my life.

3. What was the hardest hit you recieved?
Enya Grave (aka Fort Wayne Newspapers’ Kathleen Boles) chucked me under the wall during practice once and gave me a concussion. That’s the worst injury I had. To be honest, the hardest hits I’ve ever taken are probably from my teammates. My first game ever, one of my teammates actually fell on my head. And then in another game two teammates fell on my head. Thankfully my helmet sticks out farther than my nose.

4. What do people not know about the Derby Girls that’s a surprise?
A lot of people don’t know we’re athletic and it’s not a fake sport. It used to be back in the day, back in the 1970s, and I think that since that’s what people remember, they don’t know the athleticism that goes into the sport.

5. You’ve got a couple pets at home. Describe them?
I have an 8-year-old cat named Brutus, and he is one of the most friendly cats in the world. And then I have a 1-year-old Great Dane mix puppy that I rescued, and he’s deaf. I go hiking and backpacking with my dog.

6. What’s your best animal story?
While with the North American Freshwater Turtle Research Group, we would catch turtles to do measurements and then release them. There was this soft shell turtle, probably the size of my torso, and it was kind of satelliting in the water. It looked like a table. Then it swam past me and while I as trying to keep up with it, it stopped and turned around and started going down into the silt. But I was able to grab it and came out of the water with it. It was like the best accomplishment of my life.

7. When did you get your first tattoo?
It was when I was 16. It was a tiny little kiss mark on my hip. My mom helped me. She put on a bunch of lipstick and was kissing all over my hip. She kept making me laugh, which wasn’t great when you’re getting a tattoo on your hip.

8. Is there such a thing as never getting a tattoo again?
Not for me! I’ve got all these plans in the works.

9. What’s your dream vacation?
I would take six months off and hike the Pacific Coast Trail with my dog.

10. When you hear the sounds of skates rolling, what comes to mind?
Freedom. That first practice of the season is so enthralling. And the crowd is almost intoxicating.

12. How has roller derby changed?
The thing about roller derby in general, modern roller derby, is it’s a completely different sport from the 1970s. Back then it was all about fishnets, plaid skirts and it was definitely a show.

13. What three adjectives would your family and friends use to describe you?
I would hope it would be something like: adventurous, compassionate and goofy. But it’s probably more along the lines of dog-crazy, goofy and tall.

14. Who are your heroes?
Temple Grandin, Elizabeth Warren and as cheesy as this sounds, my dad. He’s been through a lot, and he’s never let it get him down. I get emotional talking about it. I love my dad. So much.

15. What’s your perfect day?
I’d be with my dog basically and hang out in a hammock. Or I’d go backpacking with my friends. When I go with them, I bring my dog and we’ll hike 10 or 12 miles, then set up camp and we’ll play Dungeons and Dragons around the campfire. People think I’m cool and then they find out I’m a massive nerd.

16. You play D&D? Are you a dungeon master?
I’m not a dungeon master. I want to try it sometime, but my schedule is not going to allow that. It’s like a part-time job. You have to write the stories and develop a story arc. I would much rather be a character.

17. What’s your character?
Right now I’m a dragon-born barbarian. And I just traded the color of my scales for a battle unicorn. I talk with a New Zealand accent.

18. Has D&D helped  you in real life?
I actually wrote a D&D program for Parks and Rec. It gets kids involved with critical thinking and problem solving. If you roll up on a huge monster and try to destroy it and it destroys you instead, it doesn’t solve the problem. So it’s fun to think of things other than, “I’m gonna kill it!”

19. You grew up here, left for a while and came back . . . why?
I love the people in Fort Wayne. When I was in California (doing turtle research), I worked with people from all over the country, and I was the only one who talked about my hometown. I think the cool thing about Fort Wayne is it’s a size where people can effect change.

20. What’s your favorite memory?
One of them is this: There was this time we were in a pretty hard game against Killamazoo (The Killamazoo Derby Darlins, out of Kalamazoo, Michigan) and they were beating us. I went out to jam and I got the lead change. Normally, I’m too shy to look out into the crowd, but that time I did. And there was my dad, just standing in the crowd clapping. I started tearing up, seeing my dad giving me a standing ovation.