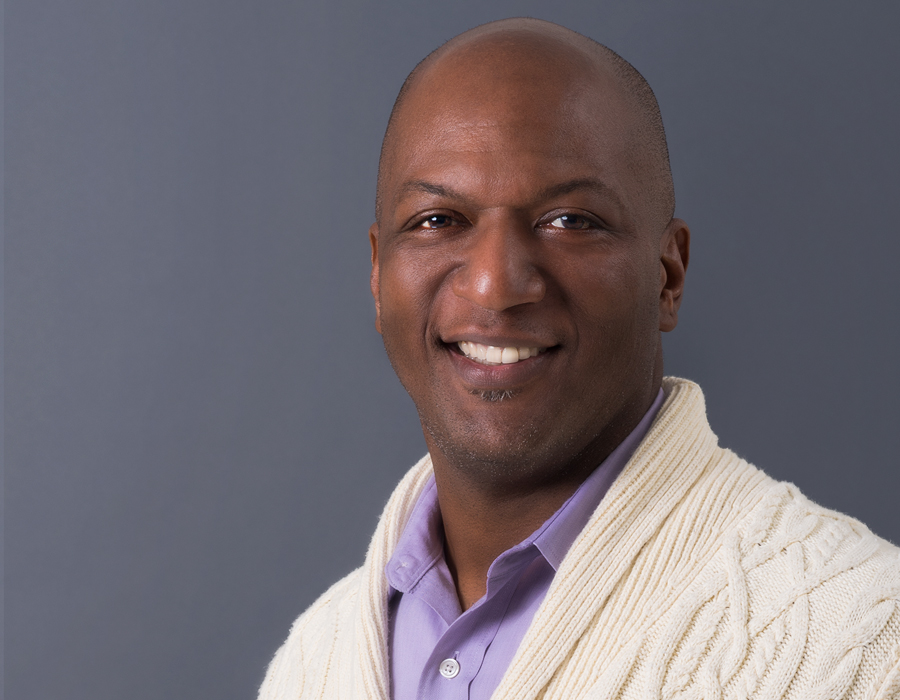 Both career and family drew Quinton Dixie back home to Fort Wayne, and he has made the most of it. He has been actively involved at IPFW, creating the religious studies program and taking on leadership of the Peace & Conflict Studies program. In town, he has served on the city Redevelopment Commission and Board of Public Safety as well as returning to his alma mater, Concordia Lutheran High School, as track and field coach. He’s determined to make a difference, and he even has a To Do list for his next life. Despite it all, he’s a glass-half-empty guy. Find out why as he plays 20 Questions.

1. What is it that people want when they come back to Fort Wayne?
There’s a kind of familiarity. Part of us knows that’s a bad thing, but at the same time once you have gone away and experienced things, you have the idea you can bring those back and make a difference here in Fort Wayne.

3. What’s your favorite course?
The course I am most proud of is my course on religion and the civil rights movement. So many people that were part of the movement understood it as a religious movement.

4. Are you working on a new book or article for publication?
I am working on a graphic novel about the life and career of Jesse Jackson. I was a finalist to write Rev. Jackson’s memoirs. I went to Chicago to talk to him and his family and his agent, and they picked someone else, who actually is a memoirist, but they asked me to write a graphic novel as well as a collection of his writings.

5. What has been the benefit of IPFW’s Peace & Conflict Studies program for its students?
I would like students to walk away with a better sense of both sides of the equation. You have to think critically about issues of conflict and conflict resolution before you can get to an understanding of peace, and those are skills that could work on any job.

6. Do you find people assume they know what you think about issues because of your position as head of the Peace & Conflict Studies program?
And because I’m a black male. All sorts of assumptions are made about what I think about geopolitical issues. If you express any kind of righteous indignation, people say “But you’re in peace and conflict studies!” So I don’t have a right to be mad about anything? That happens a lot.

7. What has been the benefit of the program for you?
I’m a glass half-empty guy. I almost always see the negative first. It shields me from disappointment. Being in peace and conflict studies, I have encountered people, students, who have reawakened in me kind of a “yes, we can” attitude.

8. So they aren’t often correct?
Not often correct. What I am often astounded by in Fort Wayne is the lack of curiosity. Fort Wayne is an incredibly diverse city, and you can go months if you choose to without experiencing that diversity. The way our city is structured, people go to their neutral corners, and you can avoid the other, if you so choose.

9. What do you think is the most significant meaning of the word “peace”?
Peace to me is more than just the cessation of conflict. It is the genuine quest for common ground and requires the recognition of our mutuality.

10. In a culture where we are always exhorted to fight for what we believe in, what is the point of peace?
I think what people who use that kind of language are trying to suggest is that there is a struggle involved in peace. King and the protest of the civil rights movement understood nonviolence as a weapon. He recognized that whether he wanted to be or not, he was involved in a fight.

11. What’s a great weekend for you?
A great fall weekend would be sitting in front of a television watching college football, reading a book and spending time with my four children.

12. What’s the last book you read for pleasure?
“Negro With a Hat,” a biography of Marcus Garvey, who is a fascinating figure. In my next life I am going to write a screenplay. That would be the film for me, a nice biopic of Marcus Garvey.

13. What’s your favorite kind of music?
I would have to say reggae, someone like Burning Spear, Peter Tosh and Damian Marley.

14. What builds you back up?
I would say food. I like to eat. I have an array of comfort foods for different moods. I connect food so much to place and people that eating certain things either takes me back to a particular time and I get nostalgic or it gives me a certain kind of energy because it reminds me of people who motivated me.

15. What do you do in addition to teaching?
I am really passionate about track and field. I ran track in high school and coach at the same place, Concordia Lutheran High School, boys and girls. I coached my children, three of the four.

16. What does Fort Wayne not have that it needs?
A really good farmers market like Eastern Market in Detroit that combines green produce and also food stalls that give you a strong sense of ethnic flair.

18. And what are you hopeful for?
For Fort Wayne being a better place than it was when I grew up here. It’s not that it was a bad place then, but I think as a parent I feel a sense of obligation to leave the world in a better place than when it was given to me.

19. Why are you a glass-half-empty guy?
When I was in high school and college, I was in the Army ROTC program, and there is training that forces you to plan for worst-case scenarios, so over time I’ve become a person that leads with the worst-case scenario. If I feel comfortable with my contingencies for those things, then it is worth going forward.

20. Is there a thread of meaning you’ve followed through your life?
It’s a series of discoveries. Someone said we live many lives in one lifetime, and that’s the way I feel about my own life.