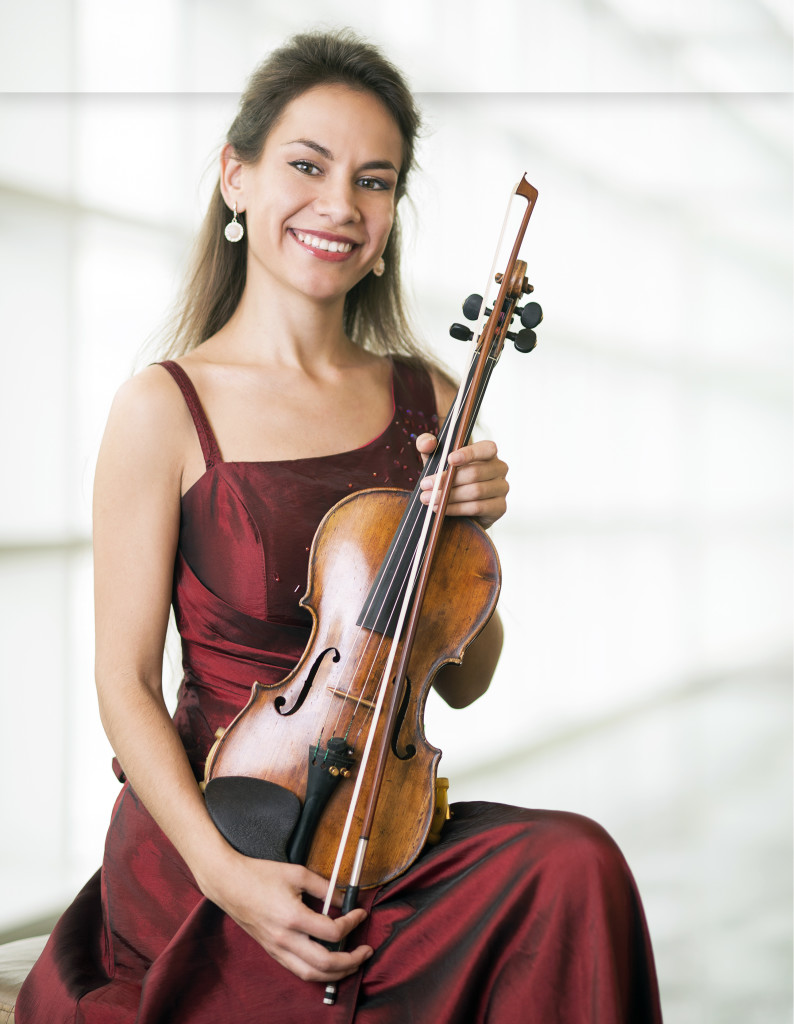 In Russia, you do one thing — and you do it well. For Violetta Todorova, that one thing was violin. She began playing as a 5-year-old in St. Petersburg, and her talent brought her to the states as a teenager. She’s thrived with symphonies in Denver and Chicago as well as smaller orchestras. A huge fan of Mahler — his layering of the music is what gets her — and the Baroque era, Todorova also delves into pop hits and is now part of a burgeoning cover band called Electric 5. She’s currently wowing audiences with her solos while serving as the Fort Wayne Philharmonic’s new concertmaster. What’s a concertmaster? Find the answer to that, plus who Todorova would date from Star Wars, her secret hobby and more as she plays 20 Questions

1) You began playing the violin so young; how did you get started?

There’s a little story behind that. My mother used to play piano, and she played one piece in particular frequently: Beethoven’s Moonlight Sonata. One time I was sitting      under the piano and I started crying because it was so beautiful. So she took that as a sign and brought me to the music school.

2) Do you remember that first time in the music school?

I remember the violin teacher looking at and feeling my fingertips. I remember she said, “Yeah, they are good for violin.”

3) How long were you in Russia?

I had been coming to America for summers since I was 12, but I moved here when I was 16.

4) So, what does a concertmaster do?

5) How do you become a concertmaster?

It’s always a violinist, and there’s an audition for the position. It’s not like a usual audition. The concertmaster also plays solos. There are a number of pieces that are really challenging for a violin, and they have to do those. Then there’s an interview, and you have to play with other members of the philharmonic, and you also have to lead. You have to like to lead – some violinists do not want to be the concertmaster.

6) Did you want to be a concertmaster?

I never thought about it, but I have been a concertmaster since I was a kid. In school, they would put better violinists closer to the front, so basically the concertmaster is usually the best violinist. I usually sat in that position, and I just did it. I liked doing it and I feel comfortable doing it.

7) What’s the weirdest request you’ve gotten from a conductor or your fellow orchestra members?

I had a conductor once tell me right before the performance of “The Nutcracker” ballet that he wasn’t feeling well, and in case he were to collapse on the podium, he wanted me to take over and finish conducting the ballet.

8) You recently got to play the solo for “Swan Lake,” which you’ve said is   one of your favorite solos. How cool was that?

Awesome! It was so great.

9) Why is that your favorite?

I think because when I was little my mother would take me to the ballet often.

No, I did not. In Russia, you only do one thing – and you do it very, very well.

11) What’s your favorite thing to play?

12) The Philharmonic recently did shows devoted to “Harry Potter” and “Star Wars.” What’s it like playing music from movies?

It depends on what movies. “Harry Potter” and “Star Wars” have the same composer, John Williams. His music is a lot of fun to play because he actually challenges the musicians. A lot of movie music can be a little tedious and not very interesting, but his music is always superb and he’s really clever in how he writes the parts. No matter how many times we play it, I don’t get bored of it.

13) Have you seen those movies before?

I have. I don’t think I’ve seen as many “Star Wars” as I think I should’ve, but definitely “Harry Potter.”

14) Okay, so Luke Skywalker, Han Solo, Lando Calrissian or Chewbaca – who do you go on a date with?

(Laughs.) Wow. That’s a hard one, because I don’t actually remember them very well, but I think the obvious one would be Luke Skywalker because he is the hero.

(Laughs.) That was actually the first one that came to mind, but then I was like, ‘Why?’ I have no idea why.

16) Was there any culture shock when you moved to the United States?

I was shocked to hear in college you had two years to pick your major. (Laughs.) I was like, ‘You mean to tell me I had all these choices? Nobody told me!'” The cultures are very, very different. I think it helped I was really young. I really feel half American.

17) Midwest winter vs. Russian winter: Which one is worse?

The coldest I’ve ever been was in Chicago. I’ve been in Michigan, and there was a lot of snow, but I was never cold. In Chicago, something about the wind or something, it gets into your bones.

18) Do you like playing anything other than classical music?

I actually just started playing in a brand new band. It’s called Electric 5. We do covers of different pop songs and even recorded a video of Crazy, the song by Gnarls Barkley. My favorite cover we’ve done so far is “Lucky” (by Jason Mraz).

19) Do you have any hobbies people   don’t know about?

I like cats, but that’s not really a hobby and everybody knows about that. I like to cross-stitch. My grandmother used to do it a lot, and I have a lot of things passed down from her. I’ve never seen her do it, but it might be something in the genes. It’s very soothing and relaxing, and I love the reward of seeing your work as you’re doing it. You don’t always get that in music.

20) What would you tell an aspiring musician today?

Go to as many performances as you can.