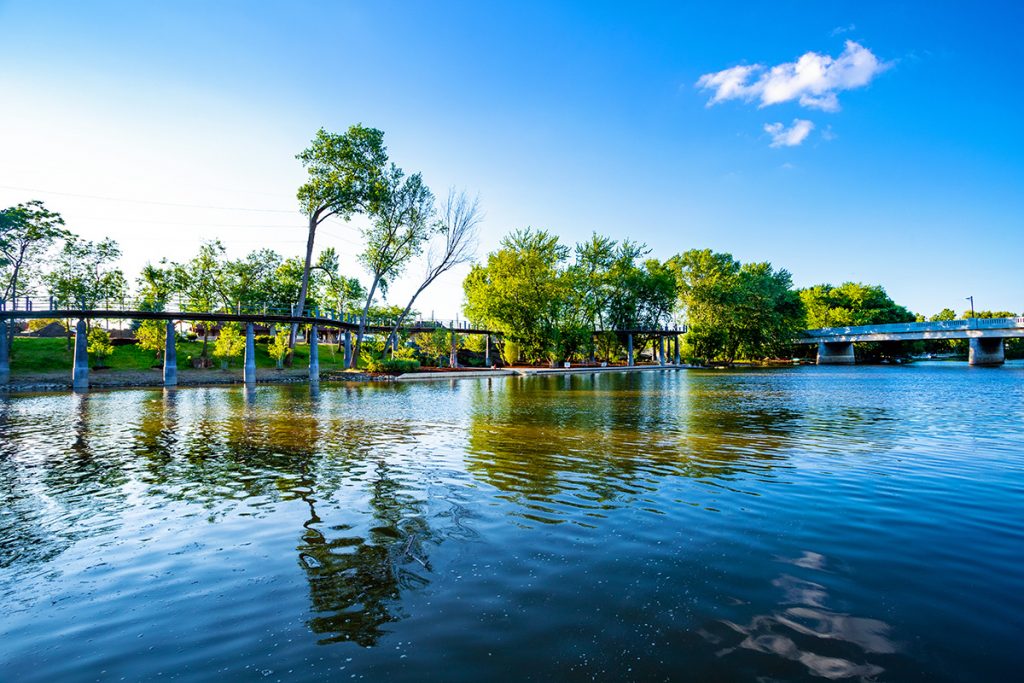 Fort Wayne’s Riverfront is front and center with the opening of Promenade Park.

The park covers four acres on the north and south banks of the St. Marys River between the historic Wells Street Bridge and Harrison Street. The opening of Promenade Park is the first phase of the implementation of the master plan for Riverfront Fort Wayne – to make the rivers a unifying element of the city and to ensure the riverfront is an integral part of the community.

The first phase of the Riverfront’s development focused on creating a public space as a park setting. Funding for the $20 million park came from Regional Cities, the City’s Legacy Fund, the Park Foundation, the Community Foundation and resources allocated by City Council. The Riverfront development is part of a broader blueprint to revitalize downtown Fort Wayne.

The second and third phases of the development will extend to the east and west of Promenade Park and funding has been approved for the public portion of these phases.

It is with these phases that the goal to foster significant private investment along the improved riverfront space will be realized.

Johnson explained that the thoughtfully designed and developed riverfront and Promenade Park provides incentives for private developers to want to develop the area along the riverfront.

“Typically for every dollar the city or public spends, $10 in private investment is made. We are already seeing mix-use private development in and around the park and we’re continuing to design and work on phases two and three of the development with a continued focus that encourages private investment, but guarantees there is always a connection to the public riverfront park and the river,” he said. The redevelopment of the city’s riverfront will enable the rivers to be part of a larger network of destinations in Fort Wayne, including Parkview Field, downtown museums, The Landing, Headwaters Park and additional new downtown development.

The overall goal is to create an authentic, iconic waterfront experience that serves as a destination for both residents and visitors. This is created through recreation and exploration along the riverbank and the urban waterfront features Promenade Park offers.

The mission for Promenade Park is to create a space that is welcoming and accessible to people of all abilities. From the beginning the city worked with the AWS Foundation, which assists people with intellectual, developmental and physical disabilities to the design the park. The city also worked with Turnstone Center and the League for the Disabled and Blind to explore what would make the park more comfortable for those with physical and mental challenges.

“We wanted to make sure the park had universal accessibility. Out of meetings with these community stakeholders, ideas for the park’s design and implementation were far beyond what we thought about when it comes to designing a park that is easily accessible,” said Johnson. “For instance, we created a tactile strip made of different paving materials that extends throughout the park to provide the blind with an easy way to orient themselves in the park.

We also found out that individuals who have dementia and are on the Autism spectrum may feel overwhelmed by large open spaces so this is why we broke up park’s the space by using different colors and textures to hopefully make people feel more comfortable as they move into the larger plaza space.”

Johnson said that the city’s parks department is also working to develop a 3D-printed contoured map of the park. The 8″- square maps made of hard plastic will feature different textures so a visually impaired person can orient himself by feeling the map which helps to link him with the park’s elements, like the tactile ribbon strip of pavement.

The Parks and Recreation Department wanted to go beyond the basic requirements of the American Disabilities Act to incorporate things that truly make Promenade Park a park for everyone. “It is all too common that the disabled community assumes that a place they visit isn’t going to be accessible or designed to meet their needs. We intentionally incorporated different elements within the park to make it universally accessible. We wanted to make a park that truly is for everyone,” said Johnson.

In addition, the park’s Auer Lawn will feature special grass that allows easy access for wheelchairs. There is also be a specialized boat cradle system to allow someone in a wheelchair access to the water by being able to easily transfer to a kayak or canoe.

Promenade Park is located on the south bank of the riverfront and is designed around social interaction with a variety of indoor and outdoor spaces.

The Park Foundation Pavilion houses Trubble Riverside Cafe & Tap run by Keli and Chad Hankee the owners of Trubble Brewing. The restaurant is designed to allow diners to enjoy a meal or drink while looking out over the river. (The pavilion will be available to rent for special events and activities.)

The Sweetwater Bandshell will also be available for rent and is designed to encourage smaller and more intimate performances. There is also the Ambassador Enterprises Amphitheatre, Rotary Fountain, gardens and the Doermer Kids’ Canal.

The kids’ canal bisects the entire park and ends with a splash pad. The water stream is decorated with boulders that help to slow down the flow of water, allowing the native plantings to filter and clean the water before it hits the river.

The park also includes outdoor concrete Ping Pong and Fuseball tables, outdoor firepits and 18-foot-tall swing-benches that look out over the river.

Another interesting element of the development of phase one of the riverfront is that the Parks and Recreation Department has been involved with the development of the riverfront’s riparian management. (Riparian means relating to or situated along the banks of a river.) For phase one, this meant the removal of invasive species; honeysuckle is the most invasive species in the river’s ecosystem as well as repairing riverfront erosion and issues with the riverbanks. The park had to be built to endure flooding.

“The number one goal was to get people access to the river; other than Headwaters Park there are not a lot of places where you can get to the river’s edge,” said Johnson. “In order to create a park that allowed for access to the river, it had to be designed to flood and the selected plants (98% of the plant species are native) needed to be able to withstand flooding.”

The south bank has quite a bit of concrete including a seawall where boats can be tied off as well as allow for direct access to the river. On the north bank the Tree Canopy Trail winds along the Rivergreenway. It is an elevated boardwalk that is completely out of the floodway. “The trail is on piers out over the river; it feels like you are walking on the river. And even when the river is high there will be no issues with flooding. In order to get the trail out of the floodway some trees had to be removed, but we tried to save as many mature trees as we could,” said Johnson. The riparian management plan also includes suggestions for plants to create a better ecosystem.

The Parks and Recreation Department takes the management of the riverfront’s riparian master plan very seriously and has recently created a rivers division and purchased equipment, including a barge with a crane to remove logs and a smaller service boat to easily get around to maintain the river front.

“It is great that the parks department already had the expertise to develop and maintain the riverfront. I am a landscape architect by training and have spent over 20 years working on environmental projects. We also had a lot of input on plant selection for Eric Ummel, the city’s supervisor of landscape and Steve Schuhmacher, deputy director of parks, who oversees the riverfront construction and development,” said Johnson.

The tree-lined north bank of the river expands its recreation and exploration opportunities with a boat ramp and dock that allows personal watercrafts – kayaks, standup paddleboards and canoes; a vendor renting water equipment will be located by the dock. The north bank also features the PNC Playground.

For centuries Fort Wayne’s three rivers – the Maumee, St. Joseph and St. Marys – have been a focal point of the city.

And with the riverfront development and the opening of Promenade Park, it is guaranteed that the rivers will continue to have an important role in the community for centuries to come.

Historic Boat Tours: Scenic pontoon boat tours offer the chance to learn about the history of the river and Fort Wayne’s heritage

Storytime On The Bridge: Families gather for weekly summer songs, stories and more on the Wells Street Bridge. A great opportunity for families to engage with the rivers.

Nature Walks: Be it by bike, on an early morning bird nature tour or a leisurely stroll, enjoy hour-long tours along the banks of the St. Marys River.

Water Quality Events: An educational series about the quality of water in the rivers and future plans for riverfront development.