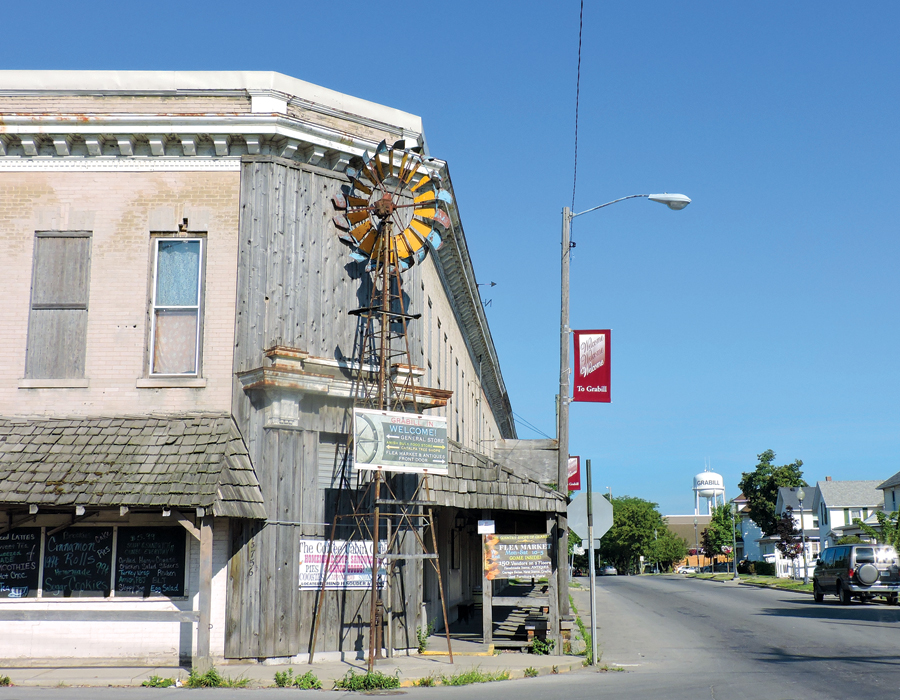 Its combination of the right people, the right place and the right skills and talents has boosted Grabill’s boundaries over the railroad tracks that traditionally formed its eastern border. That combination also enabled the town to develop a thriving industrial park that looks to be in demand.

Town board president Wilmer Delagrange expects that industrial park to extend all the way to Roth Road pretty soon.

“Things are sort of going gangbusters right now,” he said. Delagrange, who is not a real estate agent, nevertheless knows all the real estate people in and around town after 25 years in office and spends a lot of time making connections that turn into land being added to the town’s industrial park. Grabill has engaged a commercial real estate broker to represent it, he said.

That success, in turn, bodes well for the town as a whole.

“I’ve seen the town at the lowest point, and now I feel it’s getting up to one of the highest points,” he said. “And I want to keep it that way.”

The newest industrial park has come together in the past several years after the town’s first industrial properties on the north side of town filled up. A handful of companies are already settled in there, for example Graber & Graber Concrete in its million-dollar building, he said. Sauder Manufacturing, with its subsidiary Wieland Furniture, is there, too, and Our Country Homes has bought land and is beginning a three-phase plan by building warehouse space this year. Construction is under way on other buildings there while new inquiries about buying into the park are coming in, giving Delagrange reason to find more connections to make between property owners and potential buyers.

Commercial and residential development is busy in town, too. On the west side, Granite Ridge’s new subdivision, Saddle Creek, is building out 105 homes, and Financial Partners Federal Credit Union is building itself new and improved quarters. The old grain elevator that stood empty for years and burned has been replaced by new construction and a new employer, Grabill Farm Building & Supply.

“It supplies work for 320 people,” Delagrange said. “That’s a big plus for the community.”

A new Mexican restaurant, Isabelle’s, is opening this summer, in plenty of time for the annual Grabill Country Fair in September.

Grabill has a healthy supermarket, a hardware store, its own health care providers, a veterinary clinic, a busy branch of the Allen County Public Library, a post office and healthy churches. Its retailers, while fewer than when it was marketing itself as a tourist attraction, still attract visitors looking for gifts and antiques, and its restaurants, coffee shop and ice cream shop are popular with townspeople and visitors alike. Many small towns have not been able to achieve that mix and maintain it.

Having the employers in town, in those industrial parks and in the older locations elsewhere in and around town, supports all those businesses. The employees receive their paychecks in Grabill, and they’re most likely to spend them there, Delagrange reasons.

“My whole idea is to keep new businesses coming and create new jobs,” he said. “That’s going to help our retail shops. When they are in town, they are going to buy something.”

Delagrange is one of three town council members, and the town is also served by an elected clerk-treasurer.

“It’s been a challenge,” he said. His approach to the job is to be well informed about what the townspeople think and to consult with people who can help him. He appreciates, for example, the advice former town council president Joanne Sauder has given him over the years.

“I started with her as the president,” he said. “I still call her about advice, and I will keep on calling. She is just a very intelligent lady.”

It’s obvious Grabill is cared for and has been cared for by its leaders. Delagrange speaks proudly about the town’s founders who incorporated it back in 1912.

“They really looked into the future,” he said.

He is looking into the future, too. He has three more years to go on this term in office and realizes he said the past two terms were his last ones, “but people got ahold of my wife and said ‘Look. We just don’t want things to change.'”

So Wilmer Delagrange is still looking into the future for Grabill and talking to people about the possibilities.

He’s considering the idea of building a new town hall on that lot, and he wants to get the feeling of the businessmen and the whole town about that idea, “just hash it out with some of the townspeople now,” he said.

The push behind that idea is the fact that he can ask people to meet him at the current town hall on First Street and they won’t know where it is.

He’s also concerned that when people drive to Grabill to shop, they don’t really see a place that looks like the heart of town.

He wants Grabill to, first, have a town hall people recognize and, second, have a heart of town that has some gravitas, a presence that is clearly, unmistakably Grabill.

Having the Grabill Town Hall at the main intersection would be one way to achieve that.

“So, I don’t know,” he said. But he’ll know more after he talks with people, and maybe in a few years Grabill will have a new town hall and its food bank will get the space it needs in what is now town hall.

Just in case, he knows Grabill has already signed on with Visit Fort Wayne to host a big group of farm convention visitors in 2019, just like the town hosted the Honda Gold Wing conventioneers several years ago. No matter what, Grabill will be ready.

First appeared in the August 2016 issue of Fort Wayne Magazine.