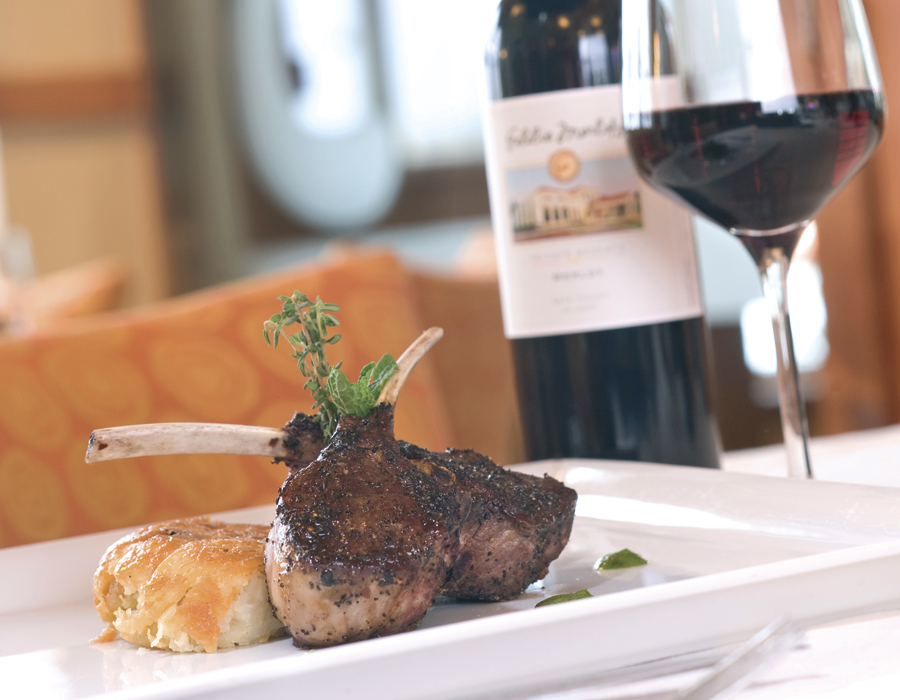 Long noted for its premier selection of aged beef and succulent seafood, Eddie Merlot’s is upping the ante with some new twists on the already new and improved menu in the coming months.

According to Executive Chef Matthew Nolot, Eddie Merlot’s menu was recently tweaked with the addition of new appetizers such as Steamed Mussels, Oyster Shooters and a variety of sushi selections, featuring mahi rolls, tuna, crab and salmon.

“We’ve also added new entrees, including a coffee-encrusted New York Strip steak and a Stilton Stuffed Filet Mignon, wrapped in bacon,” Nolot said. “All have been very well received.” One more entrée worthy of mention is a trio of grilled filets, topped with bleu cheese, crab and asparagus béarnaise sauce and a peppercorn sauce.

While debuting these dishes to Eddie Merlot’s diners, Nolot doesn’t seem to be too restricted when it comes to working up even newer twists on the new entrees. Take, for example, transferring the coffee-encrusted rub on the New York Strip steak to a lamb dish.

“This is a great rub for almost any kind of meat,” Nolot said. “Even though one of the main ingredients is freshly ground coffee beans, it isn’t overpowering and takes on a sweet, slightly smoky flavor that compliments the domestic lamb like a perfectly tailored suit.”

Nolot said using the harder-to-find domestic lamb is preferable to using imported meat and worth the effort.

“I like to pair the chops with a mint pesto and a simple potato casserole; you really can’t go wrong with lamb, mint and potatoes in any combination,” he said. “The recipe for mint pesto goes together very quickly. Just prepare your favorite potato dish and you have all the makings for a great family dinner.”

In addition to the overhaul on appetizers and entrees, Nolot has headed up some redesigns on the dessert cart, namely a Crème Brulee French Toast, served with cinnamon ice cream and a homemade caramel sauce.
Nolot said now that Eddie Merlot’s has expanded into larger markets — Indianapolis, Cincinnati and Columbus — it was time to spruce up the menu. Selections were influenced by information from the other cities as well.

“Steak and sushi are hot trends in larger markets,” he said.

After five years with Eddie Merlot’s, Nolot doesn’t depend primarily on trends in cities where the company has already established a presence. He travels a couple of times per year to Chicago to visit other similarly styled restaurants and check out what’s new and exciting on their menus.

“Surprisingly, Chicago is considered a ‘food town’ ahead of places like New York City or Los Angeles,” Nolot said.

Nolot targets a couple of favorite places to visit in the Windy City, one of which is Japonais, a high-end steak and sushi restaurant. According to the restaurant’s website, Japonais offers “the best of both worlds — signature sushi and cold appetizers by world-renowned Sushi Chef/Partner Jun Ichikawa and hot appetizers and entrees by celebrated Chef/Partner Gene Kato.” Nolot also visits The Gage on Michigan Avenue, featuring “upscale comfort food, fine wines and boutique beers.” Taking cues from such a high-caliber restaurants can mean nothing but good things for the local gourmet palate. In fact, the next section of the Eddie Merlot’s menu to undergo renovations will cover lighter fare.

“(Salads) will be more composed,” Nolot said, noting rather than relying on simple house salads with choice of dressings, diners will be able to choose from salad selections made with key components, paired with a dressing that works with and enhances flavors.

The company, feeling little impact from the downturn in recent economic conditions, hopes to continue expansion into more markets this year. Plans are in the works for several more after that as well.

For Nolot, serving as executive chef for the flagship Eddie Merlot’s restaurant has allowed him to contribute to the growing empire, working with and training others before they are promoted to another market. Quite frequently, someone he’s worked elbow-to-elbow with in the Fort Wayne kitchen is the person tapped by the company to head up the kitchen in a new market.

As for his personal plans for the future, Nolot could see himself moving to a new, larger market. But for now, local patrons will revel in his creative vision and talent as they sample new Eddie Merlot’s fare in the restaurant where it all started.
Coffee Crusted Lamb Chops

1. Mix together the first six ingredients.
2. Liberally coat the lamb chops with the coffee crust and allow to come to room temperature, about one hour.

3. Puree the mint and macadamia nuts in blender until smooth.
4. Slowly drizzle in the olive oil and then the Parmesan cheese.
5. Taste and season with salt and pepper, and cover the surface with plastic wrap to prevent browning until serving.
6. Grill the lamb chops over medium high heat for about 4-5 minutes per side for medium rare.
7. Serve with your favorite potato dish, and serve the pesto on the side.

First appeared in the January 2009 issue of Fort Wayne Monthly