What could be more American than Hall’s? 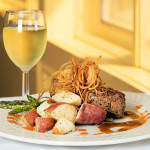 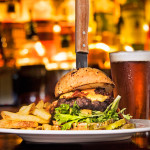 For Thanksgiving, Mike Newsome hopes to have a couple thousand people in for dinner.

Fortunately, he has the professional staff of the Hall’s Guesthouse Grille and the spacious facilities of the Guesthouse banquet facilities to work with, but – really – the menu is a traditional and personal one.

So it’s easy to understand how The Guesthouse Grille has become known for its holiday buffets.

“It’s a tradition. We definitely have repeat families,” he said. “My neighbor comes here every Thanksgiving.”

Up front will be the carved turkeys and Ossian hams. All the basic fixings will back them up: green bean casserole, sweet corn casserole, potato supreme casserole, smashed sweet potatoes (jazzed up with some Cajun spice, cream cheese and salted candied pecans on top), mashed potatoes, gravy. A big salad bar will include the pea salad that Bud Hall suggested adding one year.

“I had never had pea salad, but I did it and I fell in love with it,” Newsome said. “We do a bunch of different salads. Every year they kind of change.”

The desserts come courtesy of the experts at the Hall’s bakery and include homemade tortes, cheesecakes and “every kind of pie you can imagine,” he said, including, of course, pumpkin pie and a pumpkin streusel “that was introduced to me at my kids’ day care.” And don’t forget Hall’s signature German chocolate and carrot cakes.

“No one goes home hungry,” he said.

“It’s amazing how much food we prepare and how fast we go through it. Thirty buckets of potatoes! But that’s what makes you feel good when you go home: ‘I fed that many people.’ The day goes by fast.”

When Newsome has been in Las Vegas, he finds himself pondering the much larger daily buffets there and marveling at them.

“I think how little we are and how big they are,” he said. “I can visualize what’s going on in the background.”

The buffets are an ongoing part of the Guesthouse Grille’s operations. It has weekly Sunday brunches, daily breakfasts for hotel guests and caters events year-round.

It’s also a restaurant for both hotel guests and anyone who wants to come in to dine. The decor is clubby with an impressive collection of Tim Brumbeloe art on the interior walls. Guests seeking a different atmosphere can request seating in the room overlooking the sunny courtyard.

Newsome is a longtime chef in the Fort Wayne restaurant scene, having worked at Bill’s Bistro and The Oyster Bar before joining Hall’s Restaurants about 10 years ago. He has been at the Guesthouse Grille about five years.

The Grille’s theme is American food, with a steakhouse emphasis.

“The biggest thing with food nowadays is you have to make sure you are using fresh food always,” he said. “That’s my philosophy – fresh food. I’ve been that way all of my life.”

The menu is filled out with pork, chicken and pasta dishes and a good selection of big salads and soups.

The bar was just renovated and has MadBrew and Birdboy Taildragger craft beers on tap. The wine list includes Indiana wines from Two-EE’s and Huber wineries.

1. Break up danishes, bread and cinnamon rolls into medium pieces, and spread out them in a greased 13-by-9-inch baking dish.

3. Cover with foil, and bake at 350 degrees F. for about 45 minutes, then remove foil and bake until top is golden brown.

4. Let cool for about 10 minutes, then with rubber spatula spread the rum sauce over the top and serve hot with whipped cream.

2. Thicken the sauce with a slurry of 1/4 cup cornstarch mixed with 1/4 cup water. Let cool slightly.