Something to Taco About 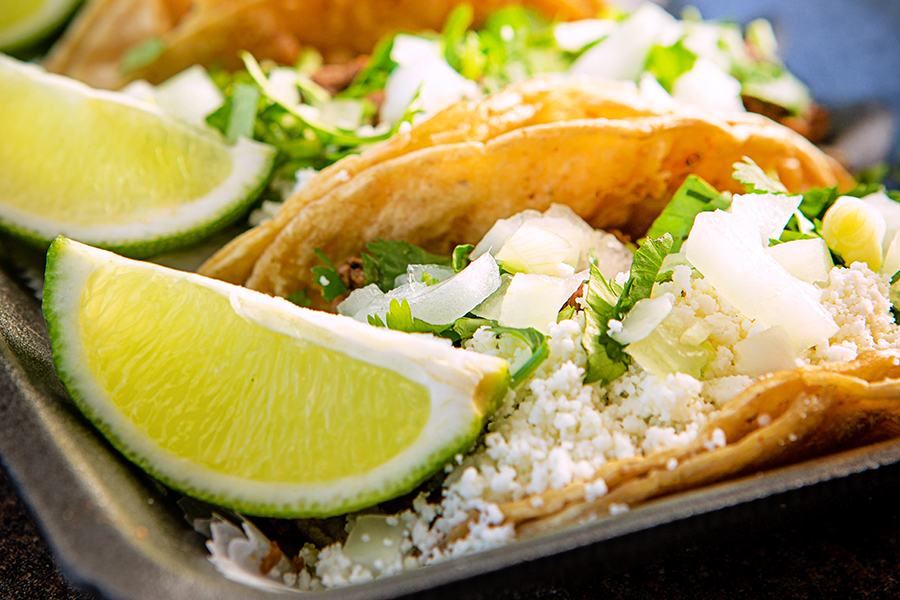 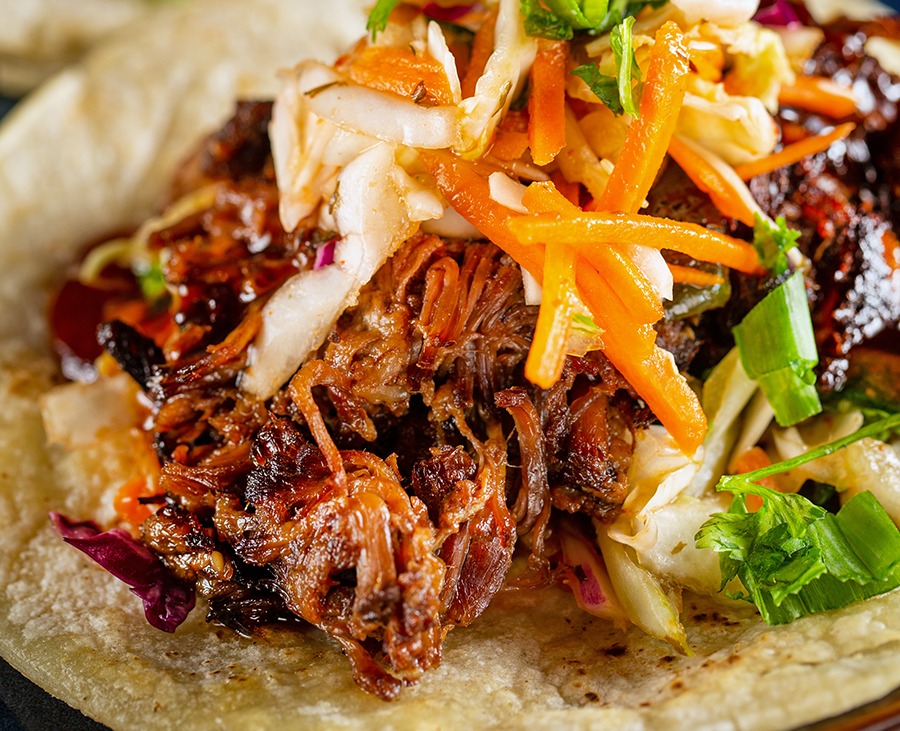 Tortillas, a mixture of ground corn and water, have been made for millennia. But the idea of the folded sandwich, otherwise known as a taco, is a more modern culinary invention.

Indeed, the idea of a taco as food didn’t surface in Mexican culture until the 19th century. But in just a couple hundred years, tacos have evolved from street food to fast food to gourmet.

A taco can be filled with just about anything – meat, cheese, vegetables, cilantro, cheese, crema. It can be served with steak, pork or fish, as well as rice and beans. It can be served in a basket or paper wrapping from a taqueria or on white china from an upscale restaurant.

The popularity of this Mexican street food has exploded, no doubt in part to the trendy #tacotuesday. Just check out the numbers: Americans eat 4.5 billion servings of this folded fare each year.

But Fort Wayne’s taco scene isn’t just about a hashtag and once-a-week offering. There are authentic taquerias filled with the aroma of marinated meat and cilantro and there are upscale offerings that turn the traditional into gourmet.

But whatever your taste, you can be sure it will be satisfied – and then some.

With a bright orange building and colorful lettering, Tacos Arandas El Amish stands out among its neighbors. And while it might not seem like a four-star restaurant, the taqueria is always on the short list of best tacos in Fort Wayne – and for good reason. Among its favorites is the al Pastor. But it’s not just the flavorful pork, deftly seasoned with chiles, but the cooking method. The meat is roasted on a giant rotating spit – similar to what you would expect to see in a Greek restaurant. If you’re looking to add on, go for the guacamole, which has an unexpected heat. 2012 Broadway, 260.420.2731

Owned by a family from Guanajuato, Mexico, Taqueria Mi Tierra offers authentic tacos at an affordable price. The salsas, which are unique and flavorful, are made in house, and the menu has everything you’ve come to expect – and more – from a taqueria. Diners can choose their tortilla (corn or flour) and their protein – or proteins, if you so desire. Opt for the beef or go with the chorizo. Or go all in with a threepeat and get the taco dinner, which includes rice and beans. 2302 S. Calhoun Street, 260.458.9944

What began as an operation in the corner of the Rongos family grocery store, Salsa Grille is serving up authentic street tacos in a familiar, fast casual environment. There are four locations, including the recently remodeled Broadway eatery, where taco fans can fill a tortilla (corn or flour) with the protein of their choice. There’s flavorful ancho chili chicken and the classic carne asada, while pork carnitas, ground beef, barbacoa and chorizo round out the menu. For the adventurous, Salsa Grille also offers lengua – better known as tongue. There are also veggie, bean and tofu options for vegetarians. And as the name implies, diners have plenty of salsa options – eight and counting. Get a single taco to go, make a meal of it with traditional fideo or menudo soups. 2031 Broadway, 260.425.9811, salsagrille.com

One of the newest taquerias in the city is Taqueria La Piñata, which serves up authentic Mexican fare. The staff works hard to make the restaurant, and food, feel like home. The tacos are served with cilantro and onion, although cheese and sour cream may be added. Guests may choose from the familiar – carne asada, carnitas (pork) or ground beef – or be adventurous with Mexican classics such as tripe (edible animal stomach lining), lengua (beef tongue) and buche (pork throat and stomach). 6121 N. Clinton Street, 260.483.8213, taquerialapinata.com

La Michoacana might be best known for its sweet treats – from horchata ice cream to frozen bananas. But the eatery also prepares savory Mexican classics, including huaraches, tamales and, of course, tacos. Popular dishes include the Tacos Pastor, a marinated pork, which was developed in central Mexico after Lebanese immigrants brought shawarma (spit-grilled) meat to the area. At La Michoacana, the tacos are served on corn tortillas with cilantro and onion. 1421 N. Wells Street, 260.423.3515

Since Jerry Perez began selling tacos from a cart in 2012, his business has expanded into a full-fledged food truck and, most recently, a brick-and-mortar location. But Perez, who has one of the longest-running food trucks, hasn’t forgotten his roots when he partnered with Ben Thompson to open Solbird Kitchen and Tap. Thompson is the owner of Birdboy Brewing Co., and the restaurant combines Perez’s culinary skills with Thompson’s brewing talent. The Chicken Tinga tacos feature flavors that most identify with Latin cuisine – chipotle-braised chicken, roasted red pepper salsa and avocado. The menu also has a nod to international flavors with the Korean beef. As for the Jazzy Taco, it features chorizo, ancho-grilled shrimp, grilled orange pepper and pineapple, chipotle crema and queso fresco. Diners may mix and match tacos to create their perfect plate. 1824 W. Dupont Road, 260.451.0052

At the Hoppy Gnome, a taco is more than just a taco. The downtown restaurant opened in 2015 with the intention of bringing gourmet tacos to Fort Wayne. But in the four years since the kitchen first began cooking, the culinary team has taken the flavor profiles from Mexico to gourmet. The tacos feature unique ingredients and combinations – or at least those you would not expect between the fold of a corn tortilla. A recent menu, which is updated seasonally, started off with a meatball taco featuring lemongrass pork meatballs, red curry mayo and mango slaw. The Pulled Pork takes the taco to the Carolinas with pork carnitas, Carolina mustard barbecue sauce and smoked jalapeno slaw. And while tacos are often known for having a meaty filling, the Hoppy Gnome is also vegetarian friendly. Its Tofu Taco has bulgogi-marinated tofu, pico de gallo, hummus and veggies; while the Woodland Mushroom has arugula, goat cheese and garlic mojo. Diners may create their own entree by choosing two or three tacos, and there’s no end to the combinations. 203 E. Berry Street, 260.422.0070, hoppygnome.com

Local chef Johnny Perez is taking tacos back to the street with his food truck Mercadito Taqueria. Perez, who has worked at some of Fort Wayne’s most popular restaurants, is bringing tacos (and other Mexican fare) to the masses with his food truck, whose name means taco market. The staple of nearly every taqueria is the carne asada taco, and Perez flavors his steak with a house marinade, then tops it with guac sauce, cilantro and onion. But he also adds a fresh twist with fish tacos that feature crispy perch, and a shaved brussels sprout slaw (mayo, chipotle, pepitas) in a corn tortilla. Mercadito Taqueria can be found at Three Rivers Distilling Co. on Tuesdays for, yes, taco Tuesdays. 260.267.6419, mercaditotaq.com

Some of the newest kids on the block, Edwin Chow and Hannah Britton are betting that Fort Wayne won’t like Korean food – they will love it, especially when it’s served as a taco. Chow Down, a Korean taco truck, is a venture between the friends who met at Huntington University. Using meats flavored with Korean spices and sauces, the menu features Korean BBQ chicken tacos and spicy pork belly tacos. Salsas are made with tropical fruits such as mango, pineapple and kiwi to balance the spice. Chow Down’s signature sauce adds tanginess (and a kick) to make every bite unique and delicious. 408.410.1619, chowdownfw.com

While many tacos feature hearty proteins, fish tacos offer a lighter option. At The Oyster Bar, diners may choose to have the fish of the day blackened or fried. The chefs then fill a grilled tortilla with the fish and top it with shredded lettuce, avocado, pico de gallo, smoked gouda and chipotle mayo. 1830 S. Calhoun Street, 260.744.9490, fwoysterbar.com

At Paula’s on Main Restaurant and Seafood Market, the chefs bring the beaches of southern California and northern Mexico to its lunch menu. The Baja Fish Tacos feature blackened tilapia placed in grilled corn tortillas with lettuce, avocado, white cheese, and fresh pico de gallo. Salsa and chipotle sour cream are served on the side. 1732 W. Main Street, 260.424.2300, paulasonmain.com

Forgive us if the idea of tacos and Don Hall’s don’t seem like a likely pairing. But after Hall’s Original went through an extensive renovation, the classic family restaurant had a new addition on the menu. Among traditional breakfast offerings appeared a breakfast taco – a flour tortilla filled with scrambled eggs, cheese, pico de gallo and salsa verde. 1502 Bluffton Road, 260.747.7509, donhalls.com