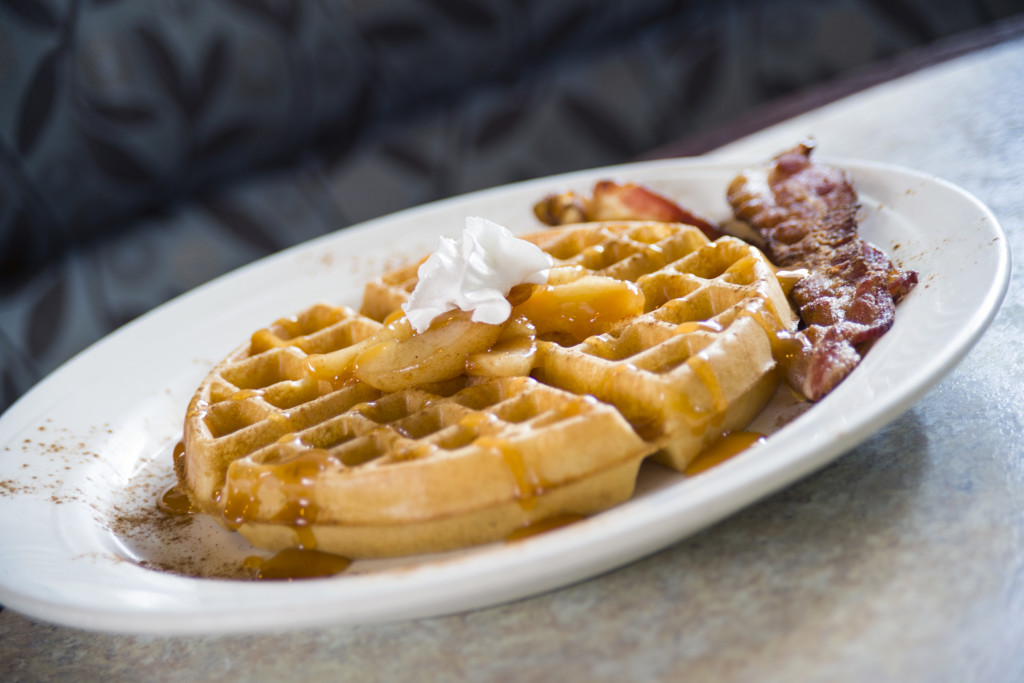 It sits at the front of the restaurant: The Machine.

A stack of oranges rests in its wire top, some already jammed into plastic tubes, all heading to be squeezed and smashed until their fresh juice flows forth from a spout at the bottom of the juicer.

From time to time, Sam Giatras will stride over and operate the machine for the kids, even though he’s become mostly hands off at his restaurant. The young ones love it, watching how the juice is made, just as they’ve for the past 14 years.

Today, those who marveled at the juice machine as 2- and 3-year-olds are still coming to Spyro’s Pancake House as teenagers. And those who’ve worked at the popular West Jefferson Boulevard eatery for any length of time are used to seeing generations of families return again and again, from meeting-the-parents to reveling in a honeymoon to parenting their own batch of little ones.

As well as it should be, because Spyro’s is a family affair and born from a family looking for more time together.

“We wanted a breakfast place so we could spend time with our kids,” said Jean Giatras, who owns Spyro’s with Sam and their two grown children.

The Giatras hail from Chicago, where both worked in restaurants.

Sam, a native of Greece, owned restaurants in the city’s suburbs with his brothers. Jean grew up in her father’s restaurant, where she worked from the time she was little. The two eventually met each other, and then met another man who came from the same little Grecian island as Sam. This man had a proposition.

He wanted help running a gyro joint in Fort Wayne.

The Giatras took on the opportunity, but after a decade and two children, the couple decided to open a restaurant that served only breakfast and lunch to have evenings free to spend time with their children.

“It gave us so much time together (as a family),” said Jean.

Spyro’s first location was on Bluffton Road, which opened on Oct. 20, 2003. The current location on Jefferson Boulevard soon followed, though the Bluffton location has since been sold and has become The Bluebird Restaurant.

The Olympic omlette–made with gyro meat, feta cheese and served with a side of Spyro’s homemade tzatziki–is likely inspired from Sam’s Greek roots. The hash browns come loaded with everything from sausage to jalapeno slices to feta cheese. And the loaded skillets are packed with cheese, various meats (corned beef hash, ham, country-fried steak, chicken) and loads of vegetables.

Since everything is done to order, it might take a little longer for an omelette or pancakes or sausage to cook, but the wait is well worth it once what’s on your plate hits your mouth.