That’s what the chefs at Junk Ditch are looking for 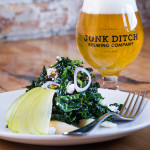 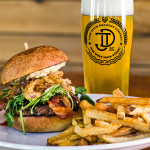 That’s what the chefs at Junk Ditch Brewing Company look for, day in and night out.

“It’s why we do it,” says Andrew Smith, one of the three chefs who run the restaurant and brewery on the west end of Main Street.

Smith and his cohorts, Jack May and Dan Campbell, met while working at Joseph Decuis. The trio were part of what Smith calls a “graduating” class at the well-known Roanoke haunt that also included chefs at The Golden downtown.

And they are always looking for that expression on someone’s face – sometimes they mouth the word – that just says “wow.”

“It’s so rewarding to see that,” Smith said. “Even if someone came in and they don’t have that, we try to make them something else and give that to them. We always want to give them something incredible.”

And there is plenty of incredible food on the restaurant’s menu.

Whether it’s the tender venison mixed with oyster mushrooms, charred onion, tagliatelle and parmesan of the Cacio e Pepe pasta dish or the famous Junk Ditch burger – consisting of boursin, crispy onion, bacon, aioli all in a house-made GK Bakery brioche bun – the dishes are mouthwatering.

The tagliatelle in the Cacio e Pepe is handmade, an important aspect of all the food at Junk Ditch. The chefs come from the school of thinking that the most local, most fresh food is the best food, so everything is from scratch and from local producers as much as possible.

“If it didn’t taste better, we wouldn’t use it,” Smith said. “The flavor to the plate is the most important thing.”

Junk Ditch meats come from Indiana-based Fisher Meats. Bread is made in-house thanks to the aforementioned GK Bakery, which is run by local chef Grace Kelly and provides products wholesale to many Fort Wayne businesses.

The Cacio e Pepe has become one of Smith’s favorite dishes to make, due to the work that goes into making the pasta from scratch and finding the right mix of oyster mushrooms and venison. It’s easy to lose yourself in the dish and forget others around you. That’s how good the food is here.

Pizza is another staple at the brewery, and nobody can be disappointed with the spice and meatiness of the Carne Pizza.

Sausage, bacon, red onion, red sauce, chili oil and smoked mozzarella sit atop an ample crust, though it’s not obscenely thick. The pizza is cooked at 600 to 800 degrees Fahrenheit in a wood oven. No steel, no metal. The fire is stoked and the pizzas are cooked on a stone floor.

Even the decor is mostly local.

The chefs spent days fashioning wood from storm-felled trees from West Central neighborhoods into tables and part of the walls and entrance of the restaurant, Smith said. It’s the old home of the Korte Paper Company warehouse, providing high ceilings and lots of windows to lend an industrial vibe.

You can’t talk about Junk Ditch, though, without mentioning the beer.

For every dish, there is a beverage that can go with it splendidly. Whether you’re looking for the Backbone – a delicious red ale – or something like the Camelote – a dry saison – the brewery has you covered.

The brewery and restaurant both grew out of the food truck Affine, which gathered a huge following as the Fort Wayne street-food craze took off a few years ago. The goal, though, was to always establish a restaurant where the chefs could delight customers.

And to get the chance to offer them those “wow!” moments.