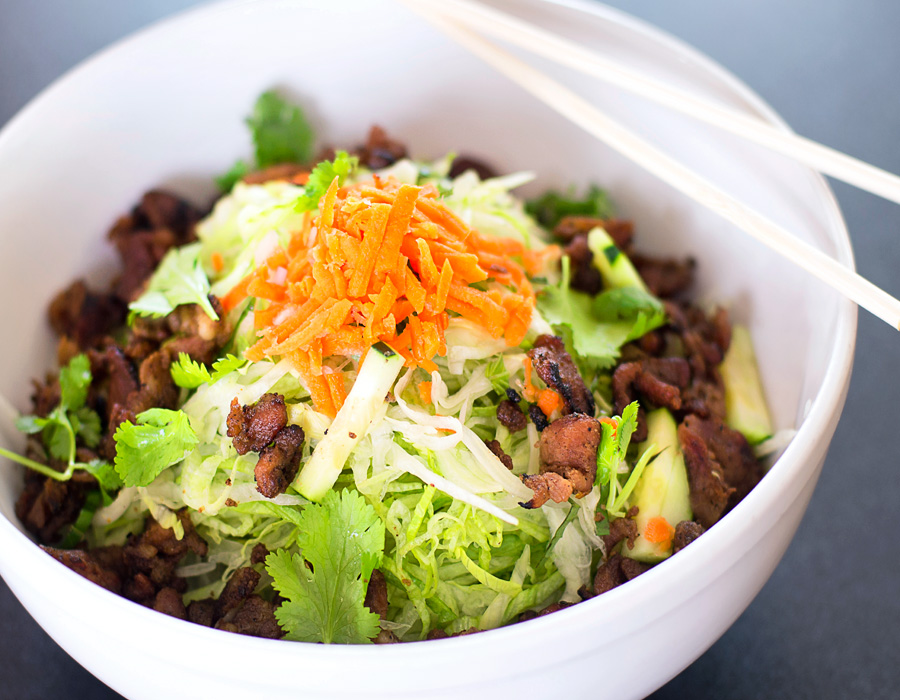 Banh Mi Barista’s bubble teas are a hit, and its food makes it a delicious destination.

With all the different restaurants opening that have brought new cuisines and flavors to the area, Thao Le and her family thought the time had come to open their own fusion restaurant. They dubbed it Banh Mi Barista, and word quickly spread through social media that the restaurant was a great place to get authentic Vietnamese and Chinese dishes.

Located in a small strip mall on Coldwater Road, Banh Mi Barista’s unique, fresh take on traditional dishes has won over the community, and there are often lines stretching to the door filled with people eager to get their hands on one of the restaurant’s unique “bubble” teas, banh mi sandwiches and noodle bowls.

Thao Le serves as the restaurant’s manager in addition to being a co-owner with four other family members: Will Le, Hien Le, Tam Le and Quoc Le. All have experience running other Asian restaurants, including West Coast Grill and a Chinese restaurant in Ossian. Thao Le said her brother Will Le is the primary cook and the point person for developing new recipes.

“It’s not fast food, but it’s not a sit-down dinner restaurant either,” she noted. Diners order at a small counter flanked by two large LED screens that post the day’s menu. Servers then bring the orders to the table.

This summer, the restaurant plans on introducing new dishes to its relatively small menu. Currently, Banh Mi Barista specializes in the Vietnamese sandwiches that gave the restaurant its name: “banh mi.” The sandwiches are made on crusty French baguettes and loaded with diner’s choice of meats, pickled carrots and daikon radish, cucumber, cilantro and jalapeño peppers and tasty sauce.

Two other specialties of the house are the rice noodle bowls, which feature diner’s choice of chicken, beef, pork or vegetarian, rice noodles, lettuce, cucumber, cilantro, basil leaves, pickled carrots and daikon topped with a tangy house sauce. Then there are the delicious fresh spring rolls, crammed with cucumber, lettuce, pickled carrots and daikon (are you sensing a theme?), avocado, basil and a vegan mix of vegan ham, tofu and carrots, all rolled in rice paper wrappings.

But what makes Banh Mi Barista really stand out (apart from its delightful staff, who patiently explain how dishes are created to anyone who asks) are its bubble and milk teas and smoothies. Add in “boba” – soft, juice-filled balls that “pop” in your mouth with a squirt of flavor – to your drink and you have a unique experience that’s a lot of fun, too. The teas come in flavors as varied as blueberry and sesame and can be prepared hot, iced or blended.

“Why didn’t we have (bubble teas) in Fort Wayne?” Thao Le said the family wondered in planning the restaurant.

And its “pho,” a Vietnamese soup, has grown in popularity to the point that the restaurant is adding it to its weekday offerings. Pho (pronounced “feu”) is a soup made from beef broth (usually) and features noodles, fresh vegetables and herbs.

“Pho varies from region to region, depending on what (ingredients are) available,” Thao Le said. The Le family comes from Tra Vinh in southern Vietnam, so the family’s recipes are based on southern Vietnamese tastes.

“Our broth is really hearty,” she said. “Our soup base is what makes people come back for our pho.”

Still, “over time you develop your own recipes,” she said. “We’re constantly coming out with new recipes,” such as a red velvet smoothie making its debut this summer.

“We try all kinds of new things,” Thao Le said. “We get to experiment. And people are willing to try it out.”

1. Dip rice paper sheets in a bowl of lukewarm water to soften.

3. Center shredded vegetables on upper middle of rice paper and layer meats and top with avocado.

5. Tuck sides of rice paper over fillings and roll over remaining paper to complete the roll.

7. For the peanut sauce, boil the hoisin sauce, peanut butter and two tablespoons water. Let the sauce cool and use as dipping sauce for spring rolls.