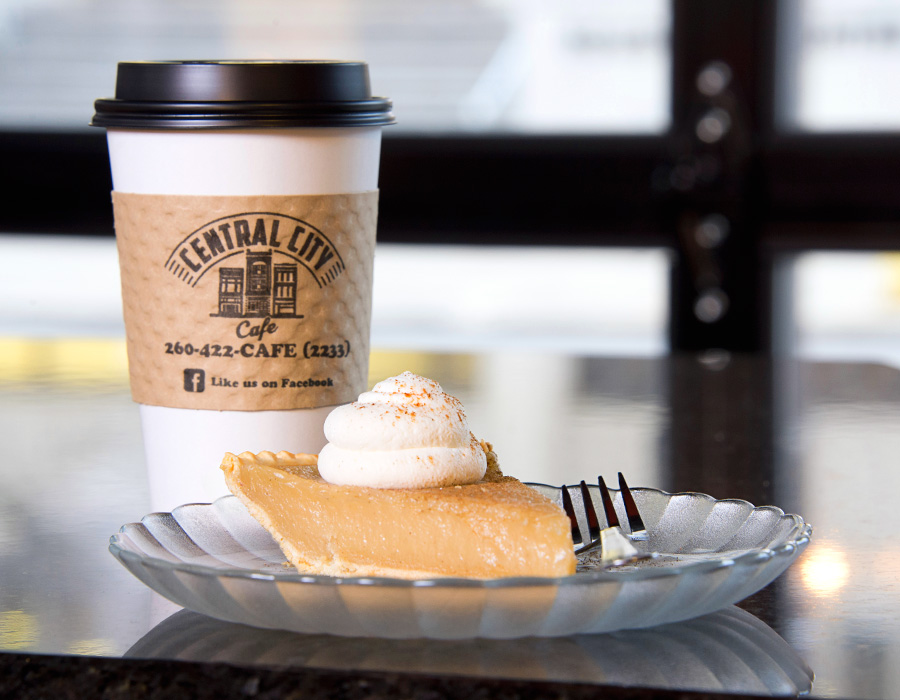 The building, at 620 S. Calhoun St., is about 154 years old and has served as home to many businesses, including the Allen County Democratic Party headquarters and most recently, Deli 620. It is directly across the street from the former City-County Building (now the Rousseau Centre) and is now home to a delightfully urban lunch spot dubbed the Central City Café.

Toscos, whose experience in the restaurant industry includes six years at the former Park Place Grill, where she served as manager, found herself drawn to the building when she worked there one summer when it still housed Deli 620. When it came up for sale last winter, she knew she had to have it. She had tried to buy it twice before, but this third time was the charm.

As with any old building, much renovation had to be done, and Toscos was up for the challenge. After Park Place, she had gone into restaurant design, helping create the vision for the Trolley Bar and two of the Ziano’s restaurants in town. An artist, Toscos created the lovely murals on the walls of the Ziano’s on Covington Road and on Dupont Road.

“I love designing in general. I love to be able to create,” Toscos said.

To that end, Toscos had four layers of wall coverings peeled away to expose the original interior brick walls along the south side of the restaurant. The red brick glows warmly and makes the space feel cozy, while corrugated steel panels line the north-side wall and lend an urban feeling (not to mention the garage door that opens to allow for al fresco dining in warmer months). That urban feel is exactly what Toscos was going for in her design.

“I had the best time in the world designing this restaurant,” she said. “I want to target the younger business professionals” who populate downtown.

“I like the feel of downtown, but it needs to be more metropolitan to attract that younger generation coming up,” she said. “I hear countless times (people say they) feel like they just walked into a Chicago or New York” restaurant.

What about the food? No matter how lovely the surroundings, it takes good food to get people to come back. Here as well, Central City Café doesn’t disappoint. Toscos points proudly to the 14-foot salad bar, which features fresh salad ingredients and a rotating menu of options. At the end nearest the front counter, you’ll find delightful delectables created weekly by “amazing” pastry chef Michelle Aschliman, who studied at Ivy Tech. Her pecan pie is delicious, and her caramels, which sell two for a buck, are chewy and creamy and sweet. Andrew Fremion, who contributed this month’s recipe for chicken corn chowder you’ll find on page 49, and who formerly worked at Hartley’s Restaurant, mans the grill.

The dishes revolve around sandwiches and paninis and flatbreads – quick, delicious and filling for downtown workers who need to get in and get out, Toscos said, but she’s noticed an increasing number of people who come to sit in the cozy upstairs dining room, where an electronic fireplace contributes ambiance and warmth (as, she noted, old buildings can be a bit chilly in the dead of winter).

The restaurant is sensitive to those with food allergies and offers gluten-free breads for all sandwiches and paninis. The regular flatbreads are made with Indian naan bread. The Reuben sandwich and fish tacos are two very popular dishes, and the house-made chips that accompany entrees are crunchy and delicious. If only someone could devise a way to bag those chips, Toscos said, she’d jump on selling them. The restaurant also sells sheets of baklava, plus pies, cookies and brownies for custom orders.

2. Add diced vegetables, and sauté on high until they sweat.

6. Reduce heat and simmer for 45 minutes.

First appeared in the January 2015 issue of Fort Wayne Magazine.