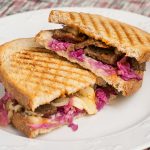 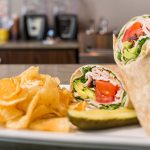 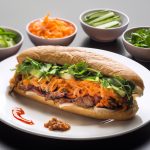 Legend has it that the Fourth Earl of Sandwich, John Montagu invented the sandwich while gambling in the late 1700s. He was loath to leave the gambling table for meals, so he instructed someone to mash some cold roast beef between slices of toasted bread for sustenance. In truth, people ate sandwiches many centuries before Montagu started gambling. All Montagu invented, inadvertently, was the name.

Sandwiches, especially after homemakers were able to buy sliced bread, have long been valued for their portability and ease of preparation. But, the intrinsic simplicity of the sandwich hasn’t prevented chefs from getting fancy with the concept.
Chefs have devised artisan sandwiches, and some even want to give the sandwich a new name, handheld. But this idea doesn’t go with the fact that some of the best sandwiches (meaning the messiest) aren’t easily held in one’s hands.
The idea of handheld is definitely NOT the best thing since sliced bread. But, here’s a guide to some of Fort Wayne’s best sandwiches. (Barbecue, breakfast or submarine sandwiches are not included in this roundup, as they rightfully belong in categories of their own.)

We know pretty definitively that the first sandwich eaten by the Fourth Earl of Sandwich was filled with roast beef. There are many versions of the roast beef sandwich across the country. The one most prized by locals is the Italian Beef sandwich, a Chicago innovation. It features thin slices of seasoned beef on a roll. The whole thing (including roll) really should be sopping with juice left over from the cooking of the meat. The Italian beef may be the only soaking-wet sandwich you are expected to eat with your hands. The Redwood Inn is generally known for its sausage rolls, but also serves one of the best Italian Beef sandwiches in town. And it is likely that no one there would bat an eye if you opted to eat the latter with a knife and fork. 1432 West Main Street, 260.426.7543

Some people think you’re crazy when they hear that one of the best cheesesteak sandwiches in town is proffered by the Hot Corner stand at Parkview Field. It is known many fans (of the sandwich) have purchased a TinCaps game ticket just so they could get their hands on a Hot Corner’s Philly Cheesesteak. 1301 Ewing Street, 260.482.6400, parkviewfield.com
Since we’re on the subject of Philly Cheesesteak, recognition also needs to go to Taste of Philly in Roanoke. Taste of Philly serves the real deal. 4227 East Station Road, Roanoke, 260.672.0550

With all the focus on Fort Wayne’s Famous Coney Island, other excellent area Coney stands don’t always get the attention they deserve. The Coney dogs served at Jeff’s Coney and East State Coney ARE great, but that’s not what these establishments do exceptionally well – it’s their Sloppy Joes. This makes sense: What every great Coney dog place must get right is its secret sauce, and sauce is what turns an average Sloppy Joe into a superlative Sloppy Joe. A side benefit of having two Coney stands in town that serve superlative Sloppy Joes is that you can also ask to have the Sloppy Joe sauce added to your hot dog. 6330 East State Boulevard, 260.748.7300; 2831 East State Boulevard, 260.471.1000

Despite assuring readers that barbecue sandwiches weren’t going to be included in this list, an exception had to be made for the Big Pig at Rack & Helen’s Bar and Grill. The Big Pig is a grinder that combines three incarnations of pork (pulled pork, ham and bacon) and tops the sandwich with a spicy BBQ sauce, pepper jack cheese, coleslaw, onion straws and jalapeno straws. 525 Broadway Street, New Haven, 260.749.5396, rackandhelens.com

The Dash-In has been one of the best places in town to get grilled cheese sandwiches for a pair of decades. The eatery’s menu has a grilled cheese section with nine inventive sandwiches and nine distinctive flavor combinations. Why these sandwiches are called “grilled cheese” and not “cheese toasties” isn’t clear. A cheese toastie is the preferred northeast Indiana slang for this type of sandwich. Bring this up with a nearby stranger at the Dash-In and you might trigger a cheese toastie diatribe, but let’s not to argue about what these sandwiches should be called. If there is one subject most of us should be able to agree on, it’s the unmitigated delightfulness of melted cheese. 814 South Calhoun Street, 260.423.3595, thedash-in.com

While the cities of Miami and Tampa argue over where the Cuban sandwich (aka the Cubano) originated, Fort Wayne residents can, without debate, enjoy the fare at Caliente. All Cuban sandwiches feature ham, roast pork, provolone, pickle slices and mustard. The key to distinctiveness of the Cubano lies in the special Cuban bread and the grilling of the sandwich. The sandwich is cooked to perfection at Caliente (by native Cubans Gus Rodriguez and Yalili Mesa) in a grill known as a plancha. In 2017, Caliente graduated to the big time when it moved to a prime downtown location. 120 West Wayne Street, 260.471.0900, calientecuban.com

The Breaded Pork Tenderloin sandwich evolved out of schnitzel, a dish brought to Indiana by German immigrants. The sandwich tends to consist of a massive piece of flattened and fried pork on a tiny bun. Indianapolis tries to claim a lot of the pork tenderloin glory, but Nick’s Kitchen in Huntington, which opened in 1908, is widely acknowledged to be the first restaurant to offer this sandwich on its menu. 506 North Jefferson Street, Huntington, 260.356.6618, nickskitchen.net

In its 10 years of existence, the Friendly Fox has taken on a role for south side residents that the ACME Bar & Grill has long had for northside residents – it’s where southsiders meet for business and pleasure. It serves great sandwiches. Special praise must be reserved for the gorgonzola brisket sandwich. 4001 South Wayne Avenue, 260.745.3369, friendlyfox.org

The Southtown Inn is a shrine to all things pickled and pickle-able. The Macedonian Special Sausage Sandwich, which features pickled cabbage and handmade sausage patties is a covert favorite of Hoosier foodies who want the place all to themselves. But not anymore. 6811 Decatur Road, 260.447.9101

Having just praised Macedonian sausage, it’s good to mention that Pembroke Bakery and Café makes a great Vegan Reuben consisting partly of corned seitan. The corning process usually involves soaking beef in a salt solution, yet seitan is wheat gluten. It’s unclear how wheat gluten is corned, but the results are a sandwich that pleases vegetarians and carnivores alike. 300 East Main Street, 260.247.7220, pembrokebakeryandcafe.com

The banh mi sandwich is a marriage of French and Vietnamese cuisines. A banh mi sandwich consists of a French baguette stuffed with meats, pickled vegetables, fresh vegetables, herbs and spices. There are many places in Fort Wayne that make this sandwich but you can’t go wrong with the two restaurants named after this culinary mashup, Banh Mi Barista, 5320 Coldwater Road, 260.387.7222, banhmibarista.com; Banh Mi Pho Shop,1925 Fairfield Avenue, 260.745.4388, banhmiphoshop.com

Another exception to the alleged barbecue sandwich restriction in this roundup is the white BBQ chicken sandwich at Hop River Brewing Company. This sandwich is just so distinctive, featuring a white barbecue sauce (hence the name) and locally-sourced chicken. Pickles make this sandwich perfect. 1515 N. Harrison Street, 260.739.3931, hopriverbrewing.com