It's a quality enjoyed by both chef and his guests.

By Julianne Will for Fort Wayne Magazine 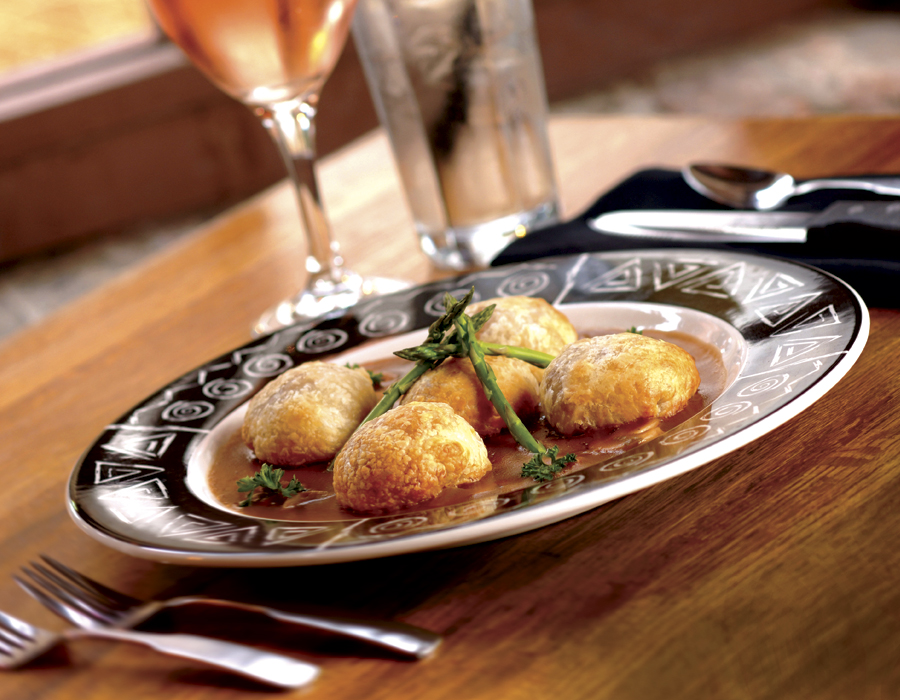 Why mess with a good thing, the saying goes. Executive Chef Brett Garner has a really good thing going at Cork ‘N Cleaver, and he sees little reason for mess. It’s hard to argue with such logic.

The upscale steak and seafood restaurant on the north side has a stellar reputation for food, atmosphere and service. It’s a place for celebrations — anniversaries, promotions, holidays. It has a fiercely loyal band of regulars who populate the colorful and inviting dining rooms throughout the week. Cork ‘N Cleaver’s lavish salad bar and decadent mud pie are famous in surrounding states.

And its patrons are served by a staff so satisfied they stay for decades — as many as 26 years. Among the longtimers is Garner, who marks 13 years at Cork ‘N Cleaver this month.

Garner is noteworthy in a field where a two-year tenure is common. He attributes it to the leadership and vision of Cork ‘N Cleaver owner Wally Seward and the way he treats the employees and guests. “It’s kind of like a family,” Garner says.

Plus, steakhouses run through Garner’s blood. His first job was in the kitchen of King’s Restaurant and Lounge in Gladwin, Mich., where he lived during his high school years. There, he learned the skill and technique of cutting meat. He estimates he’s cut more than a million tenderloins in his career.

When he came to Fort Wayne to study architecture at ITT, Garner worked part time in the kitchen at Sizzler Steak and Seafood. He worked at Ryan’s Steakhouse for a time, then moved to Lone Star Steakhouse when it opened locally. “I love meat and potatoes,” Garner says. “I’ve found a nice fit here in Fort Wayne.”

While Cork ‘N Cleaver’s regulars and its reputation prohibit major changes to the menu, Garner’s influence is notable. He added the certified Angus ribeye, the escargot crab cakes are his recipe, and he developed a number of the fish features.

He also doesn’t spend a lot of time in the kitchen away from the office. “I cook every now and then, but my wife does a nice job,” Garner says. “I’ve taught her a few of my favorites.” And just what are those? Mexican and Italian food and anything unabashedly homestyle, including pan-fried chicken and gravy.

When he’s home, he prefers instead to spend time with his son and two daughters, golf and swim. He also loves to work with wood — he built a deck, fence and play set for his home on the north side.

So does he have plans to do anything different? Not anytime soon, Garner says. “I just enjoy what I’m doing.” He might be persuaded to leave by an offer to become head chef at the White House, “but I guess that’s a dream, not a plan,” Garner laughs.

As fans of his cooking might say, there’s no need to mess with a good thing.

* Look for the sauce bases at restaurant supply stores.

3. Bring water to boil and add Sauce Espagnole and Beef Bases. Add sauteed scallions and roux and simmer for 10 minutes. Strain and set aside.

5. Add Chardonnay and bring to boil.

6. Add mushroom-Chardonnay mixture to brown sauce. Heat to 150 degrees. Hold sauce while you prepare the Wellingtons.

9. Place a pool of sauce on a dinner plate. Arrange 5 or 6 Wellingtons per serving on the plate and garnish with asparagus spears.
Cork ‘N Cleaver Executive Chef Brett Garner recently debuted this dish at a customer appreciation dinner to rave reviews. The process is typical of his style: “I just start throwing stuff together,” Garner says. He offers new dishes as a special to his regular patrons; if they request it again, it’s on the menu. This incorporates his famous mushroom sauce, a customer favorite.