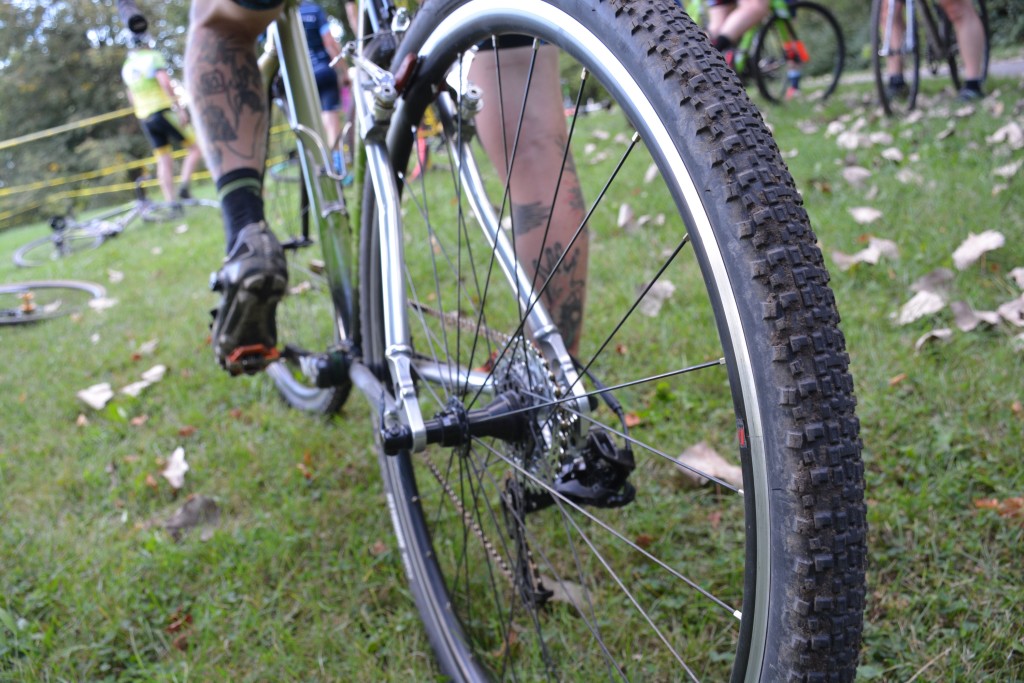 Most of the time, the grassy expanse of Bloomingdale Park just north of St. Mary’s River and west of Wells Street is a picture of tranquility. On Wednesday evenings from August to December, however, it becomes a gathering spot for some of Fort Wayne’s most daring and adrenaline-addicted cyclists.

The 30 or so athletes – ranging in age from pre-teen to 50-something – congregate at 6 pm to pedal laps on a mile-long course that twists and turns across the lawn and through shady tree groves. The unpaved track seems designed for burly mountain bikes, but most participants favor lightweight bikes equipped with road-style dropped handlebars and knobby, all-terrain tires.

The sport is called cyclocross, a type of off-road bicycle racing that originated in Europe at the turn of the 20th century but has only recently gained a foothold in the United States. According to the sport’s governing body, USA Cycling, cyclocross is now the fastest-growing cycling discipline in the country, with participation more than quadrupling in the past decade.

Fort Wayne’s riverside training races, sponsored by Fort Wayne Outfitters and now in their tenth year, have easily kept pace with the nationwide explosion in popularity.

“It’s kind of neat to watch the sport grow from five people showing up 10 years ago to 30 people on a Wednesday night now,” said Chad Tieman, who helps organize the rides.

Cyclocross courses are designed to test fitness and bike-handling skills, and might include anything from grass, mud and sand to sharp turns, steep hills and low barricades that force cyclists to dismount and carry their bikes for short distances. With the season running from late summer into winter, riders also face variable weather conditions, from 90 degrees and dry in August to 20 degrees and snowing in December.

“Cyclocross is ever-changing,” said Tieman. “It’s not like a paved road where you ride in a straight line for hours. Cyclocross keeps you on your game and keeps your mind moving.”

For serious cyclists, the Wednesday rides serve as preparation for the Ohio Valley Cyclocross Series, consisting of 10 race weekends in Indianapolis, Cincinnati, Louisville, and other cities in the region.

“If you go to a race in Cincinnati, you’ll probably see 40 racers from Fort Wayne, and half of them finish on the podium in their category,” said Tieman. “I really credit these Wednesday nights. It really pushes you, riding with your friends.”

With gutsy cyclists blazing through multiple laps on short courses that double back on themselves, cyclocross is more spectator-friendly than other cycling disciplines. Fans at weekend races are rambunctious, shouting, heckling, ringing cowbells and offering hand-ups of beer to racers.

“One reason I like cyclocross is the guy in first place doesn’t always get a lot of applause,” said Tieman. “It’s the guy who’s in last, who’s trying his hardest, who gets the most cheering. I love that. It’s the coolest thing about the sport.”

Dave McComb, who organizes separate Wednesday night training races at Franke Park under the auspices of 3 Rivers Velo Sport Cycling Club, said another attraction of cyclocross is the short, intense nature of the races compared with road or mountain bike events, which means less training for time-crunched adults.

“When I had children, I got into cyclocross because it really fit the lifestyle of a masters [age 35-plus] racer with kids. You don’t have to ride your bike 12 hours a week to be good at a 45-minute race,” he said.

While the Franke Park sessions are free, Fort Wayne Outfitters charges $10 to ride each week. The fee covers insurance, course maintenance, and post-ride food and drinks. It also includes a donation to Neighborlink, a nonprofit that mobilizes volunteers to provide free home repairs for low-income seniors and people with disabilities.

Hoffman said that although cyclocross might appear intimidating to the uninitiated, newcomers should not be afraid to show up on Wednesdays and give it a try.

“You don’t have to have a cyclocross bike, and you don’t have to be hyper-competitive. Just bring your mountain bike and give it a shot,” he said. “The local cycling community is extremely welcoming to new people, regardless of your skill or how fast you are.”