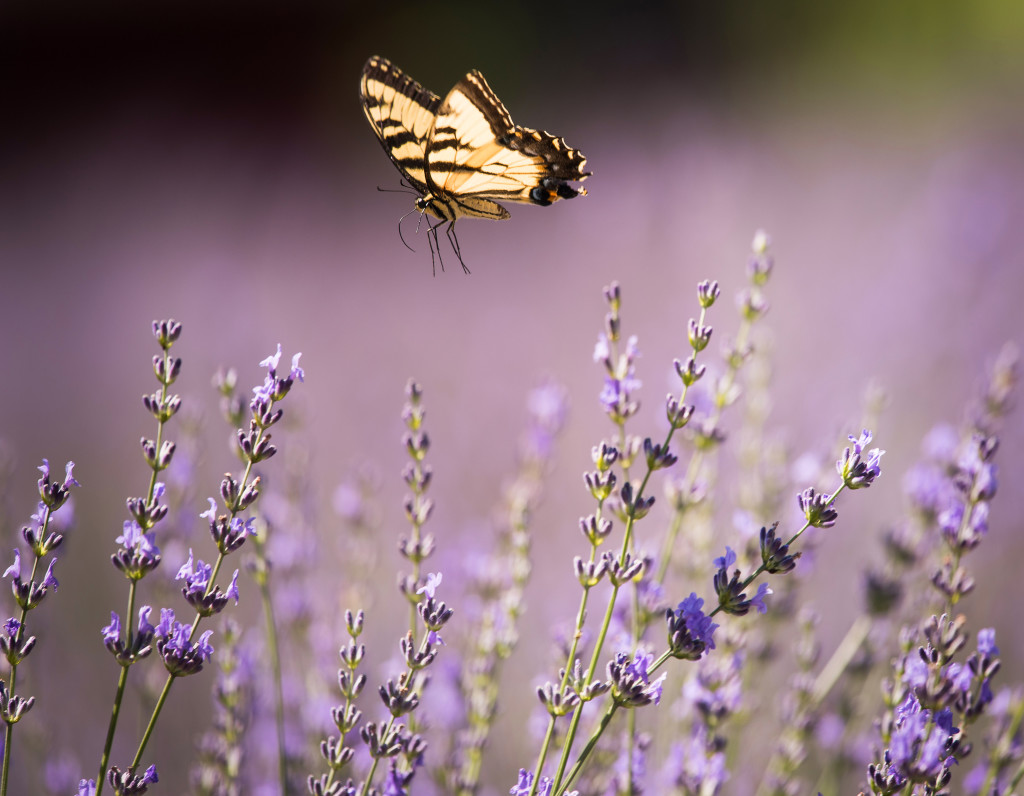 “If I could have only one oil to work with,” the instructor said, “it would be lavender.” I was in one of my first classes to learn about essential oils, and learning about lavender’s many applications for aromatherapy and healing. It’s used for everything from relaxation to fighting fungus.

Lavender oil would be my pick as well. I tell people lavender is the Swiss army knife of essential oils, but the same could be said of the lavender plant itself. Apart from its therapeutic uses, it’s a culinary herb that flavors everything from baked goods to ice cream and honey … and it’s a beautiful and fragrant addition to the garden.

Now imagine entire fields of it.

Last summer, I visited Lavender Hill Farm in northern Michigan when the lavender was in full bloom. The aroma — from living, growing plants, not somebody’s overused fabric softener — greeted us the moment we exited our vehicle, and rows of spiky purple plants stretched as far as we could see. We enjoyed lavender soda and lavender ice cream, in the shop checked out just about anything lavender you can imagine, but most of all just strolled the grounds and took it all in.

Closer to home, about an hour north of Fort Wayne, is The Lavender Lane in Rome City, where Dawn and Steve McCreery have lived since 1978. As time went by, they began thinking about a different use for the land, something they and others could enjoy and would also carry the McCreerys into retirement. They began growing a test site of lavender in 2008 and flew to Sequim, Washington (known to some as the “Lavender Capital of North America”) for specialized training. Step by step, they set up shop as The Lavender Lane, LLC, welcoming their first visitors in 2010.

“This used to be an alfalfa field,” Steve McCreery said as we toured the grounds in a golf cart labeled the “Lavender Limo.” Now they grow Hidcote Blue (Lavandula angustifolia), an improved strain of what is known as English lavender; and the hybrid Lavandula x intermedia.

Lavender is not native to the United States–it originated in the Mediterranean, Africa and India–but growing it in northeast Indiana is far from impossible if you treat it right. “Lavender doesn’t like its feet wet,” Steve said. “It loves the sun. It can’t get enough sun.” Give lavender good drainage and plenty of sun, he continued as we powered through the fields, and you pretty much can’t miss.

Of course, it isn’t all up to us mortals.

Soon after the McCreerys decided to begin this venture, Dawn headed into the field with a few flats of 4-inch lavender plants–praying all the way, she recalls, for guidance on how to arrange them and not get the varieties mixed up. As it turned out, the number of plants she had, along with the spacing between them, worked out to form a Celtic cross with rows all around it.

The following winter brought record cold, and the couple hoped for the best. In the spring, the only area that bloomed was the Celtic cross. It survived another winter wallop in 2014 and is still the focal point of their field design.

Using a copper still, Dawn distills lavender oil for some of the products sold at the farm. A local honey bee farmer has several hives on the grounds, and the McCreerys sell his lavender honey. Also sold in the shop are sleek, wooden cutting boards made by Steve, a woodworker whose tables and benches dot the property.

Lavender’s benefits are backed by science. Studies have shown inhaling the aroma of lavender essential oil can improve memory, ease the pain of migraines and relieve insomnia. During this back-to-school season, a lavender-scented pillow or a few drops of lavender oil in a diffuser could help kids (and parents) adjust to earlier bedtimes and ease the stress of new places, classes and schedules. I recommend using a quality, therapeutic grade essential oil.

Wherever you find the lavender–whether you are growing it or enjoying the fruits of its harvest–just breathe.