A trend that holds water

Succulents are increasingly popular, and for good reason 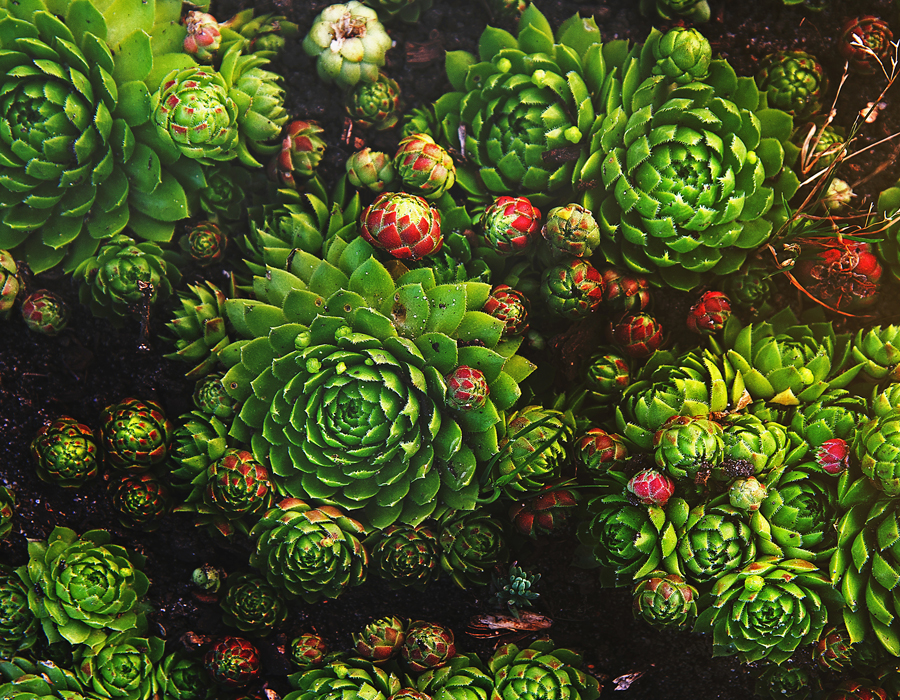 Succulents have been popping up in increasing numbers in garden centers and gift shops. With a huge variety of sizes, shapes, colors and textures – some even look like rocks – they add interest and life to your home decor, garden and landscape.

The word “succulent” means “juicy,” so it’s an appropriate name for a plant that stores water in its fleshy leaves. However, succulents come from many botanical families.

Speaking of families, aren’t cacti and succulents related? Yes – all cacti are succulents, but not all succulents are cacti. Cacti have small, round, cushion-like structures called areoles from which spines, branches, hair, leaves or flowers grow. A succulent may look like a cactus in every other respect (it may act like one, too, for all we know), but if it doesn’t have those circular areoles, it is not a cactus.

Here are a few popular succulent houseplant choices: Hens-and-Chicks, so named because they produce little identical plants (chicks) offset from the mother plant (hen). And just about every home in the 1970s had a jade plant, especially a trailing variety in a macrame plant hanger. With its thick stems and glossy teardrop-shaped leaves. It’s still a favorite (and I hear macrame is coming back) because it’s so easy to grow. Aloe is a good succulent to have in the kitchen for minor burns. The pincushion cactus does, in fact, look like a pincushion, but this pincushion produces some cool red and pink flowers. The ponytail palm and near-indestructible sansevieria are also succulents.

With their water-storing superpower, succulents tolerate heat, drought and poor soil better than your average plant, and they’re generally not prone to disease or pest problems.

“It turns out to be a good plant for a lot of folks,” said Marla McAfee, garden center manager at McNamara Sand Point – except for the chronic over-waterers who may kill a plant with kindness. “They struggle,” she acknowledged.

In addition to bright, indirect light, what succulents need the most is good drainage. “When you poke your finger down into the soil quite a ways, the soil should feel fairly dry” before watering, McAfee said. “Then water very thoroughly.”

Some well-intentioned gardeners place pebbles at the bottom of a container to facilitate drainage, she said, but soil quality matters much more. “Cheap potting soils can become too heavy when wet. Quality soils have more peat and looseness.”

Valerie Getts, landscape designer at Broadview Landscape and Nursery, had another tip for watering succulents in containers: “I just put a couple of ice cubes on it.”

For moving indoor succulents outside for the summer, both McAfee and Getts suggested gradual acclimation – setting a plant outside for an hour one day, two the next; or for a couple of days a week. Night temperatures should regularly be above 50 before you leave them out overnight, McAfee said.

Popular perennial succulents for the outdoors include sedums, which come in both upright and spreading forms. They have fleshy and often variegated leaves and produce clusters of small flowers.

“A lot of people ask about trimming” succulents, Getts said. This should be done around April 15, she said. Sedums like Autumn Joy can be cut down to the ground. Any division of succulents should definitely be done in spring before they start to bloom, she added.

Like any plants, the DIY Network notes, succulents are subject to sprawling or just may need some tidying up — such as removing broken or diseased stems, leaves and stalks – and spring is a good time to do this.

My one bit of advice on succulents: When the tag on a sedum plant says full sun, it’s not kidding. I took a chance and planted some in an area that could probably be called “partial to full sun,” and the plants followed suit by faring “fair to middling.” They looked so leggy and spindly that I considered finding another home for them – but the bees loved the blooms so much that I didn’t have the heart. “You guys can have this,” I told them.

Such are the lessons of gardening; even when we don’t get it exactly right, it can still be good.