The Atomic Sharks get kids, adults interested in music 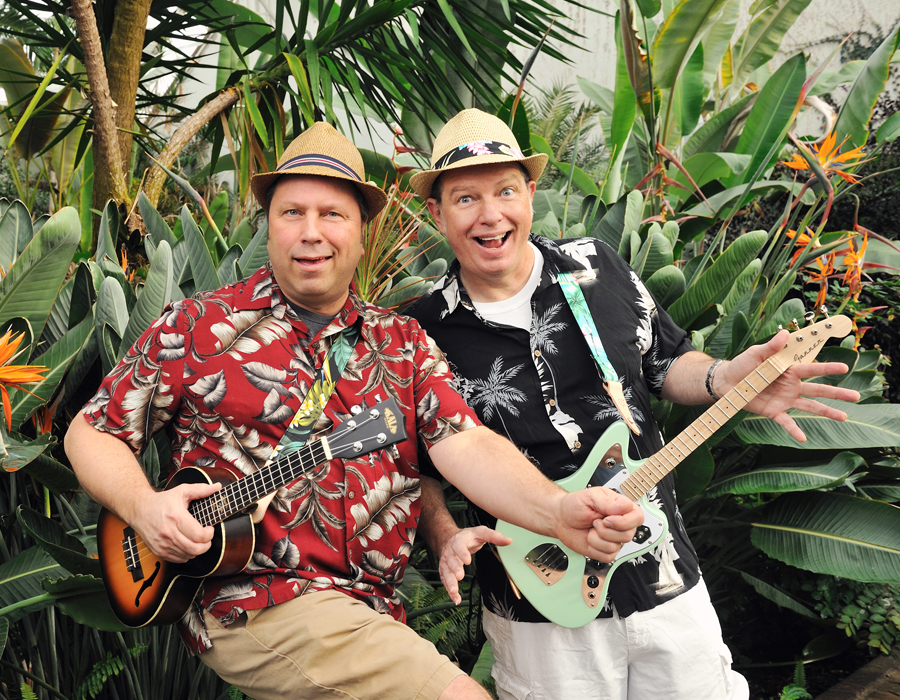 After the dissolution of his band, Madeline’s Toybox, Kris Hensler was trying to conceive of another musical effort geared toward entertaining and educating children. As program director at WFWA, Hensler was already focused on creating something that served a larger purpose. Rather than just find someone to join him, Hensler first came up with a business plan.

“I looked at it as more of a business than just getting together a band and saying ‘Hey, let’s play.’ And then I adhered to the plan that would hopefully lead to glory and stardom. You can’t just expect to sell CDs anymore, so there has to be another way to get the word out.”

He was eventually joined by Kenny Taylor, a local guitar legend who has played in many different incarnations over the years, including the popular Blue Moon Boys.

“Kris told me about this wonderful plan and this dream that he had, and I said, ‘Yes. I’m in,” Taylor said.

Calling themselves The Atomic Sharks, Hensler and Taylor decided the ukulele and an island theme was the means to their end, and they immediately saw the accessibility of playing and teaching kids music via that instrument. Hensler had been playing the ukulele for a while, but for Taylor it had long been a passion.

“I’ve been playing the ukulele forever, and when I was with the Blue Moon Boys I used to travel with a ukulele that Tom Petty’s Heartbreakers signed. I’ve seen it go from not very popular to being popular again.”

“The ukulele is a great educational tool,” Hensler added. “If kids are interested in music, they discover that they can play the instrument, and then we hope they’ll see that as a path to more music.”

Taylor teaches ukulele to individuals and groups at Sweetwater Sound, and he and Hensler have taken their mission to schools and cities around the country. Their path to national stardom has been helped by “The Music Minute,” wherein the pair teach elements of music to viewers thanks to a fun spot which airs on PBS stations. Their connection to Sweetwater led to financial help from Chuck Surack, and Hensler’s connections to PBS stations around the country have helped sell “The Music Minute” beyond Fort Wayne.

Having contacted every PBS station in the country, Hensler has now placed “The Music Minute” in 25 markets, with places as far as Orlando and San Bernardino (as well as Indianapolis and Chicago) now airing the pieces. Hensler and Taylor hope to spread that to 60-80 markets including most of the larger ones nationally. In the meantime, they have a new plan to gain some major exposure.

“We’re going to be taping a PBS pledge show in January for a June release,” Hensler said. “This will give us a chance to get the word out to Baby Boomers rather than kids because it’s the same process whether someone is 60 years old or 6 years old. Anyone can play this instrument. Even if you’ve never played an instrument before, you can pick this up in a matter of days.”