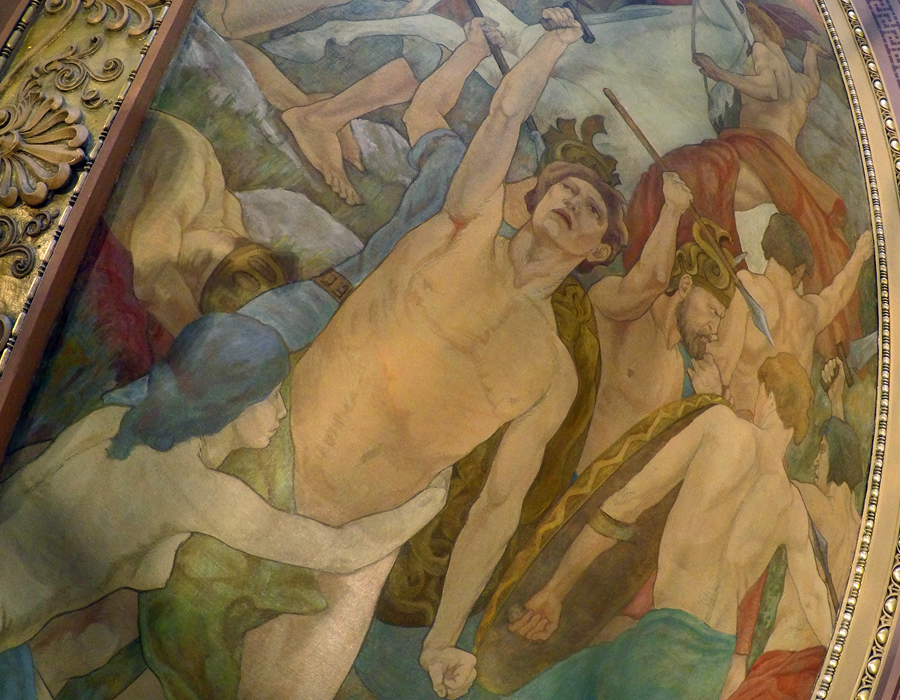 One of the murals inside the historic Allen County Courthouse, photography by John McGauley

It began with the pigeons.

They could be seen circling the Allen County Courthouse dome and roof for years. During that time the little feathered friends – or fiends, to some – left so much waste in the gutters that, unbeknownst to anyone, dams were being formed.

Then there was a leak in the historic building’s clock faces.

And it was during a photo shoot when someone noticed water damage to the courthouse rotunda’s center arches. The clock faces were re-sealed, the attic was searched for any other leaks but then more was discovered – water had begun to damage the four murals adorning the courthouse walls and repairs needed to be made to the stained glass in the dome atop the building.

Normally, this might send those in charge of such a historic building into a freak-out. But the good folks with the Allen County Courthouse Preservation Trust, the organization that handles the upkeep of the courthouse, have been through this before – and there’s no time to panic.

“It’s constant,” said Robyn Zimmerman, the executive director of the trust, of restoring the courthouse. “I really compare it to if you have an old home. They need maintenance.”

Those murals were created by Charles Holloway, who had won a gold medal in the Chicago World’s Columbian Expedition in 1893, and was asked to interpret for the courthouse how government affects our daily lives – hence the stunning vistas depicting Despotism, War, Peace and Law and Order.

You might’ve also noticed the stained glass in the dome is gone.

When maintenance crews searched for any leaks in the attic, they found the glass was in dire need of a cleaning as well as some repairs due to possible cracks.

The courthouse trust brought in Art Femenella of Femenella and Associates to assess what needed to be done on the glass. In a bit of a nice surprise, he traced the creation and design of the dome back to Luminous Prism Company, which was a successor to the George Androvette Company.

That company was a direct competitor of Louis Comfort Tiffany and John LaFarge.

The glass is now in a studio in Philadelphia, where it will be cleaned while cracks or missing parts of the glass will be repaired and reinforced with support bars, courthouse officials said. That part of the project could take up to four months.

All told, the project will cost close to $350,000 and be funded by the Allen County Board of Commissioners and the preservation trust through a grant.

“We have trust in our maintenance staff and we’re fortunate to have a board of commissioners who value the building,” Zimmerman said. “Taking care of a historic building is always a challenge.”

But, Zimmerman added, officials think the damage is small – at least compared to 1995.

By then, the murals had fallen into heavy disrepair and it took close to seven years and $8.6 million to make them what they are today – a fine piece of artistic history right in the heart of our city.

For all to see. All the time.