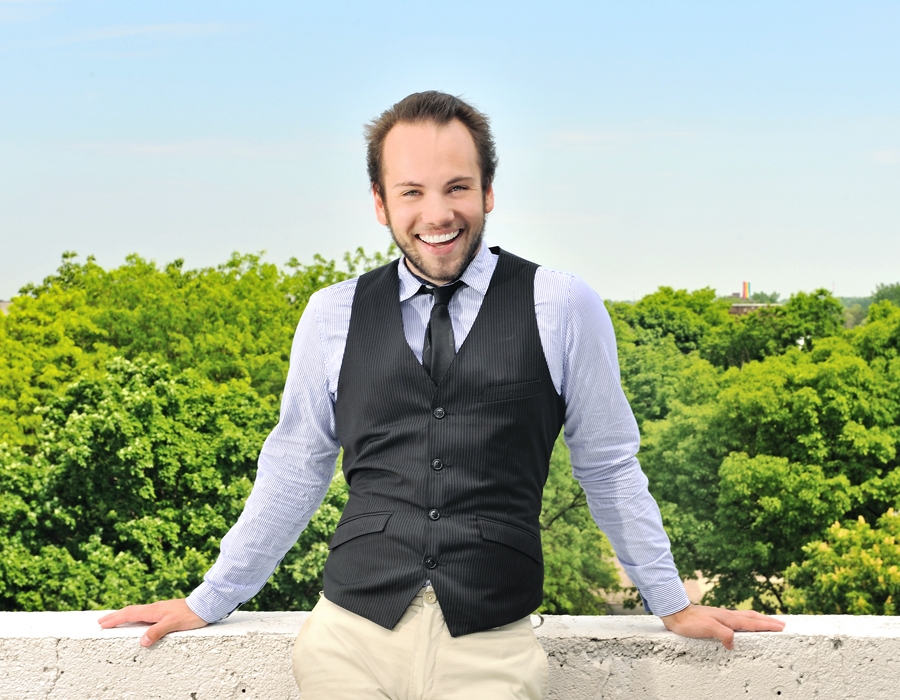 All the signs were there from the time Evan Hart was a small boy. Having moved to Fort Wayne from Indianapolis when he was 6, Hart was a performer early on, staging plays with his sister and using stuffed animals for an audience. From that homemade theater experience, he moved on to taking Youtheatre classes with Harvey Cocks, performing in school plays and show choirs while auditioning for and earning roles at the Civic Theatre and Arena Dinner Theatre. When it came time for Hart to leave for college and choose a major, though, he went a different direction.

“I decided to go to DePauw University in Greencastle and major in political science and English literature,” he said. “I loved performing but thought ‘OK, you’ve gone as far as you can get.’ I figured I’d get a secure and steady job, become a lawyer, make the big bucks.”

Although his family was supportive of his theatrical endeavors, that safer route continued to be Hart’s plan through his freshman year until fate – or maybe a wiser voice inside his head – decided to intervene. While looking for one more class to round out his second semester, he decided to take Acting I. As one class session was winding down, his professor asked who in the class would like to deliver an assigned monologue. When there were no takers, Hart decided to take the offer. He said after his 10-minute performance was over, the class was silent.

“Afterward, my professor called me over to talk, and he asked, ‘What do you want to do with your life? Because I think you need to do this.’ It was really a movie moment. He pointed me in the right direction.”

By the time his sophomore year began, Hart was back in Fort Wayne, attending Indiana University-Purdue University Fort Wayne and back in theater.

“I really threw myself in, and I’ve just finished my second year here. It’s been a joyous ride,” he said. “I had done a lot of performing, but I didn’t know about lighting design or stage management or directing. I’ve really thrown myself in to learn as much as I can.”

Hart considers his breakout role that of the Emcee at the Kit Kat Klub in the Civic production of “Cabaret,” a performance which landed him an Anthony Award nomination.

About to begin his senior year at IPFW, Hart has recently visited New York City three times and is starting to make plans for which coast he’ll make home following his graduation next year. He already knows that whatever brief instinct took him away from the theater has now been replaced by the need to perform.

“Everything I’ve done has helped me grow as a performer, and I’m so happy doing this,” he said. “I love that other people can get something out of my abilities.”

First appeared in the July 2016 issue of Fort Wayne Magazine.