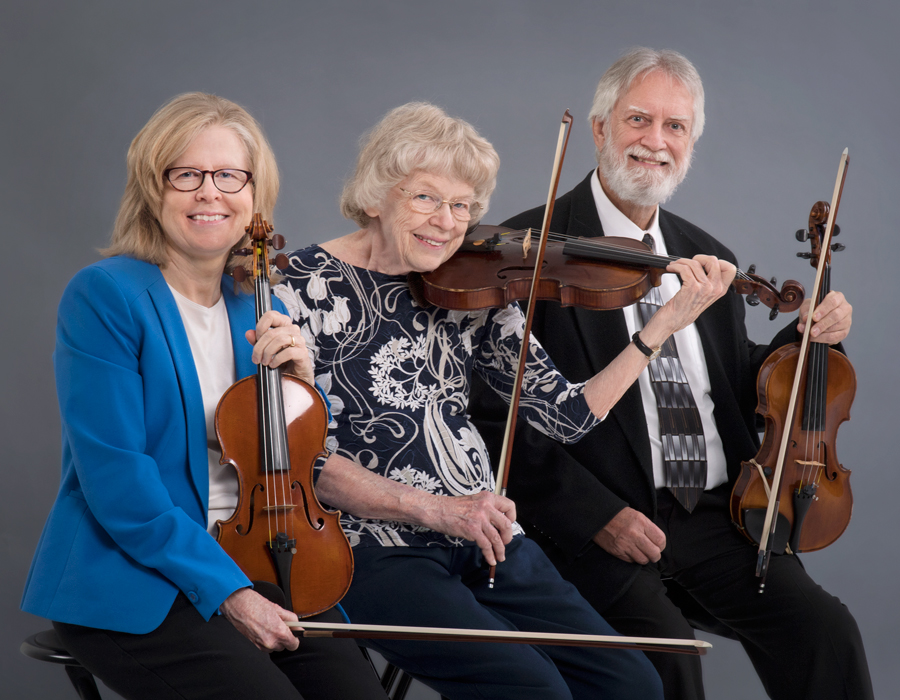 A tour group came to town, either at the Embassy or the University of Saint Francis theater, and Guy watched in awe as a gaggle of children – very young children – took the stage and proceeded to play violin with a skill she had never seen in anyone of that age.

“It just blew me away,” she said. “I couldn’t believe young children could play so well and so technically sound.”

This was Guy’s first introduction to the world-renowned “Suzuki method,” created by Dr. Shinichi Suzuki, in which music is taught to children from a very early age and modeled on the process a child uses to learn to speak.

In essence, music is taught to children as if they are learning a language.

Guy, who was trained traditionally on the violin, was a quick convert. So was her daughter, Janet Guy Klickman, who learned the violin from her mother at the age of 5 – also traditionally – and later met her husband Bill Klickman at a Suzuki conference in Wisconsin.

In 2016, the three celebrated their 20th anniversary in business at Fort Wayne Suzuki Talent Education, a program that teaches children ages 3 to 18 the violin, viola and cello.

During those 20 years, more than 500 students have come through the program. Some have gone on to have professional careers; others have used their musical talents to supplement other life paths, such as one who became a pastor and played the violin for others in divinity school.

Just as the Suzuki Method is designed to teach children music, it’s also meant to stimulate them in all areas of their upbringing – whether it helps them become more driven or even improve their posture.

“It helps children develop in so many ways, not just musically,” Guy Klickman said.

While the three have taught the method for more than two decades, up until they began their business in 1996 they were teaching the method to children through IPFW. At the time, though, they were not a high priority for the university and eventually made the nerve-wracking decision to set off on their own.

“I don’t want to be negative, but we decided we couldn’t fit in there,” Guy Klickman said. “We were in the basement.”

Bill Klickman has played in the Toledo Symphony Orchestra, the Fort Wayne Philharmonic and other orchestras in Northeast Indiana. He first discovered the Suzuki Method much like Eloise – seeing a group perform while he was once in Wisconsin.

“All these kids were doing amazing things,” he said.

The risk of heading out on their own, though, paid off. The business is still here 20 years later, and this past October former students and others organized a surprise banquet to honor the three.

Former students played for them. There was a video tribute, a medley of Suzuki repertoire and a finale in keeping with every Suzuki Method lesson – a bow and a “thank you for teaching me.”

“It was fantastic,” Guy said.