Opens this month after $10 million restoration 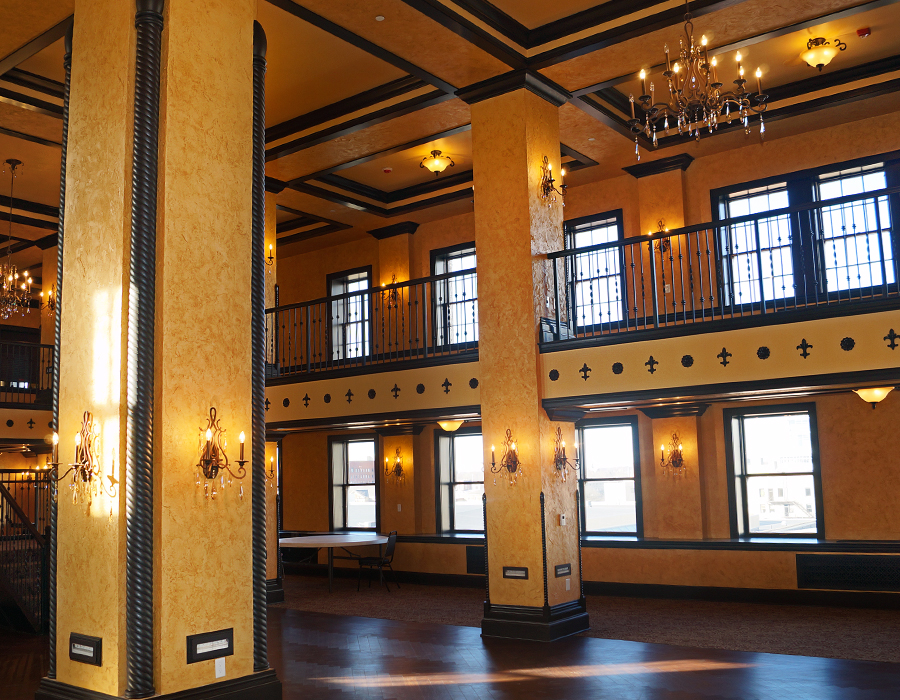 The grand ballroom was carved out of the sixth and seventh floors of the former Indiana Hotel. Photo courtesy of the Embassy Theatre.

Ten years ago, the folks running the Embassy Theatre gave Fort Wayne Magazine a peek inside the derelict Indiana Hotel, which sits wrapped around the downtown theater like Grandma’s shawl.

It was not pretty.

The hotel’s seven stories were filled with graffiti, peeling wallpaper, broken fixtures and bird carcasses. It was hard to see the potential behind the despair.

What a difference a decade makes. At the end of this month, the Embassy will open the refurbished building to the public, showing off a $10 million restoration that opened up two floors into a magnificent ballroom, perfect for fundraisers and weddings and conferences. A rooftop patio provides a marvelous view of downtown, and it will be open to the public for live music and other special events. Renovations have created conference space, dressing rooms and other amenities that have fulfilled the potential that sat vacant for 40 years.

The renovations really are a dream come true. As part of the city’s Downtown Blueprint, the hotel’s possibilities were envisioned as the following:

“The preservation and reuse of the Indiana Hotel is a critical component to the revitalization of this area of downtown. Several hypotheses have been advanced, including re-using it as a boutique hotel, a rehearsal and incubator building for performing arts groups, a high-tech support facility for the Grand Wayne Center, or a creative professionals building.”

As one of the few attractions in what was a dying downtown in the 1970s and 1980s, the Embassy “for so long was the only light shining downtown,” said Barb Richards, the Embassy’s marketing director. But the hotel was an albatross around the neck of the theater. Many proposals came and went. The problem was, as usual, finding the money to accomplish any of these goals.

But when the Courtyard by Marriott was under construction in 2009, the hotel’s developers required the city to provide a completely covered walkway to the Grand Wayne Center, located diagonally across West Jefferson Boulevard, so that guests could get to meetings and conferences without stepping out into Indiana’s lovely winter weather. The donation of funds for the Robert Goldstine memorial walkway over Harrison Street linked the Courtyard and the third floor of the Indiana Hotel, providing a covered space through the Embassy to the skybridge that links the Embassy and the Grand Wayne Center, and the Hilton Hotel to the Civic Center Parking Garage. Opening up that third floor helped spark the refurbishment of the rest of the old hotel. Other large donations helped make the rest of the renovations possible, as did contributions from the city’s Legacy Fund and tax increment financing funds.

Kelly Updike, the Embassy’s executive director, and Richards are justifiably proud of how the Indiana Hotel has been developed in the years since the walkway opened.

“The way this building was built is what makes all this possible,” Richards said. “All this” includes crystal chandeliers, wrought-iron railings, sweeping staircases and a color scheme that echoes the Indiana Hotel Lobby, the only part of the original building that retains the “Indiana Hotel” name. The remainder of the building is now known simply as the Embassy.

“It was our big, bold vision,” Richards said. “It was bold and a little scary. It’s really thrilling.”

To create the two-story ballroom, located between what had been the sixth and seventh floors, Weigand Construction workers had to remove concrete wheelbarrow by wheelbarrow, taking it down the elevator one barrow-full at a time. Weigand’s woodworkers, ironworkers and other craftsmen have created a marvelous space that’s true to rest of the Embassy (though it’s not quite as opulent as the Embassy Theatre’s magnificent theater and lobby).

“We wanted to stay true to the Embassy and to the Indiana Hotel” lobby, Richards said. “(Weigand) has great woodworkers and iron workers. They really had to work hard.”

Steel Dynamics crafted the steel supports for the renovations, and many other area contractors, designers and suppliers have spent the past several years creating a space that will be used for generations to come.

Indeed, this is, Updike said, a true legacy, just as the Embassy Theatre was a gift from the citizens of 1928’s Fort Wayne who created the then-Emboyd Theatre, and from those dedicated citizens who saved the theater from the wrecking ball beginning in 1972. These renovations are a fitting thank you to those visionaries.

“The good news is Fort Wayne has come back to downtown,” Richards said. Now we have yet another reason (and location) to celebrate downtown’s renaissance.

First appeared in the March 2016 issue of Fort Wayne Magazine.