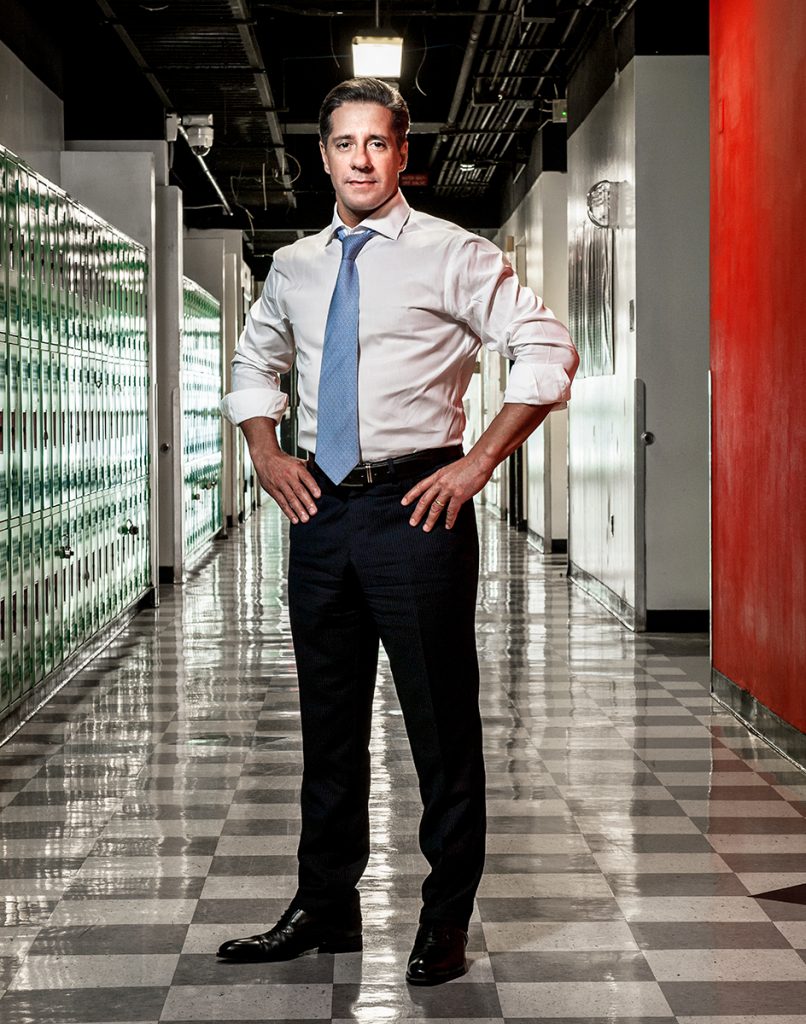 Alberto Carvalho grew up poor in Lisbon, Portugal, the son of a custodian and seamstress, who both left school after the third grade. Carvalho was the first in his family to graduate high school. As a teenager, he worked to save $1,000 to travel to the United States, where
he hoped to find better education and professional opportunities.

He found his way to Fort Lauderdale, Florida and enrolled in a community college and worked as a day laborer and busboy to support himself. He eventually earned a bachelor’s degree and thought he would become a doctor. But over time, Carvalho realized he preferred helping people improve their minds more than their bodies, and he pursued a career in education.

“As I was growing up, equity of access did not exist,” said Carvalho. “I feel it is my responsibility to not let my education experiences be replicated.”

Until being named the superintendent of Miami-Dade County Public Schools, the fourth largest school district in the US, in 2008, Carvalho spent his entire career in education moving through an array of positions in Miami’s schools, including science teacher, assistant principal, chief communications officer and lobbyist.

“Alberto Carvalho has had a remarkable run as superintendent of one of the largest and most complex big-city school systems in the nation,” said the Council of Great City Schools Executive Director Michael Casserly. “On top of that, his 11 years of leadership of the district has shown all of us in urban education what is possible. He is one of the most effective urban leaders I have known.”

Some of Carvalho’s success – Miami-Dade won the Broad Prize in Urban Education in 2012 largely for the academic gains of its Hispanic and black students – and can be attributed to Carvalho’s ability to strike the right balance. He isn’t afraid to make changes, but he also respects history and tradition. Several of his signature initiatives have been broad and far-reaching, others more targeted and contained.

For instance, Carvalho reassigned about 70% of the school system’s principals after he took over as superintendent; he also involuntarily transferred hundreds of teachers out of the county’s lowest-performing schools, he also shored up professional development across the board.

Moreover, he threw his weight behind districtwide efforts to expand parental choice and create performance pay for teachers.

“Superintendent Carvalho has created one the most dynamic and high-performing school districts in the country. He embraces
the idea that parents should be empowered to find the best learning environment for their children,” said John Kirtley, the vice chairman
for the American Federation of Children.

“His district now has over one hundred magnet schools, including some of the best schools in the country. He doesn’t fear competition; rather, he thrives on it. He is the most talented and progressive superintendents in the country.”

As a staunch believer in school choice, Carvalho has expanded choice options in Miami-Dade schools to over 1,000 different offerings.

Even as superintendent, Carvalho is really an instructional leader and isn’t afraid to roll up his sleeves and do what needs to be done. He is the founder and principal of the award-winning iPreparatory Academy that has become a model of robust 21st century learning in the age of innovation and technology.

“I believe in leading from the front,” he said. “I will not ask people to do something that I will not do myself.”

Ahead of Carvalho’s coming to Fort Wayne to give the keynote address at Latinos Count’s 2019 Viva College Hispanic Heritage Month Breakfast, Fort Wayne magazine had the opportunity to speak with the superintendent about his upcoming speech and what Fort Wayne can learn from this dynamic educator.

Fort Wayne Magazine: What is your overall message about public education?

Alberto Carvalho: My message is simple. I am a true believer that the role of public education is the same as it was 100 years ago, it is the ultimate enabler of a democracy.

FWM: What do people need to think about when it comes to education?

AC: A lot of individuals in American society focus too much attention on the outcome of K-12 institutions and post-secondary education. Too much emphasis is placed on metrics and indicators.
But, attention must be placed on the fact that students’ single academic gaps are due to achievement gaps that are caused by opportunity gaps that begin at birth.

The issues of poverty and the under-education of parents and their detachment from their children’s schools are the biggest indicators of the lack of school success. We know that access to health care, food insecurity, issues of immigration security all present big disruptive threats to families. We know that any one of these issues can have a significant impact, but if three or four of these issues are simultaneously hitting the same child and/or family, it can be debilitating.

Readiness of learning is a function of a child growing up in a supportive family environment; we know that this is not an equitable situation for all children. Although I am responsible for K-12 education in Miami-Dade County, I continue to concern myself with the importance of universal Pre-K education; this type of program insures that the initial learning readiness gaps are addressed. Investment in early childhood education is the smartest and wisest investment we can make to improve secondary-school graduation rates and to accelerate the rates at which students attend college. If we invest in early childhood, education we can close the opportunity gaps early enough so that the academic gaps close faster.

FWM: With the coming retirement of Superintendent Wendy Robinson, Fort Wayne Community Schools is beginning to look for a new superintendent, what are the most important attributes to consider for this position?

AC: It is important to find someone who has belief, skill and will. He/she needs to have belief beyond the traditional idea that every child can learn. I am tired of people not translating the rhetoric into practical action. I am so tired of listening to people who say so much about education, but don’t do anything.

And despite scarcity of resources and the pressures school administrators face, we can do far more with teacher quality and effectiveness. I believe it is critical to focus on the areas in which we have control.

Shifting blame to the parents or students won’t solve the problems. The things I am most concerned about are the factors under my control including leader effectiveness, creating the proper conditions for teaching and learning to occur, teacher salaries tied to performance and equity in educational resources. For instance, through digital opportunities we can provide educational resources to meet the needs of each child. We are able to meet the students where they are and to extend learning far beyond the last school bell. We need to empower students with the tools to learn in ways that meets their needs. We must think about individual equity.

FWM: What do you believe are the biggest issues facing teachers?

AC: I am adamant about teacher effectiveness. It isn’t about teacher qualifications. The research is quite powerful in showing that the teacher certification process and/or the advanced degrees a teacher may hold have little impact on his ability to teach.

It is all about teaching effectiveness. Teachers need to be sensitive and aware of the life situations their students face. You cannot teach the mind if you don’t touch the heart.

FWM: When it comes to education, what are the questions you continue to ask?

AC: I continue to ask such questions as: If not college, then what? Why do government-funded schools only concern themselves with learning starting in Kindergarten?

There needs to be a safety net and support that starts when the child is born.

I also continue to ask, why are we still funding an education model that is for an agrarian-based society? The idea that a school year is only 180 days for all students is crazy. Some kids need to go to school for more days and some for less.

Education needs to be decentralized from this big factory approach to an education system that is more student centric.

But what I truly lose sleep over is the year 2030. That is the year that students who started Kindergarten this year will graduate from high school.

We need to make sure that we are teaching them not just how to do something, but how to think about problems. If we only teach skills for today’s jobs we are dooming our students’ futures. Nobody can say, what success in the world of work in 2030 will look like; but I can tell you without a doubt, artificial intelligence, automation and big data will eradicate at least 30 – 40% of today’s jobs.

If we teach a curriculum with a narrow bandwidth, we will not be educating for the everchanging work place.

I am for less testing and more teaching.

We do need some testing to evaluate performance and to see if there are learning gaps; but we need better tests that are effective in measuring a variety of areas simultaneously and being able to holistically assess students.

Representatives from the private sector, public institutions, non-profits and public elected officials join together to celebrate the contributions Hispanics have made, recognize Latinos Count scholarship recipients and hear remarks from Alberto Carvalho, who has served as the superintendent of Miami-Dade County Public Schools, the fourth largest school district in the country, for the past 11 years.

Carvalho was the 2018 recipient of the Green-Garner award, the nation’s highest honor for an urban educator. Miami-Dade County Public Schools also won the 2012 Broad Prize for closing achievement gaps and, in 2018, its first-ever district “A” grade.
When he became the superintendent, in 2008, Carvalho inherited a district that faced financial difficulties, but later went on to win the top national honor for financial management from the Council of Great City Schools.