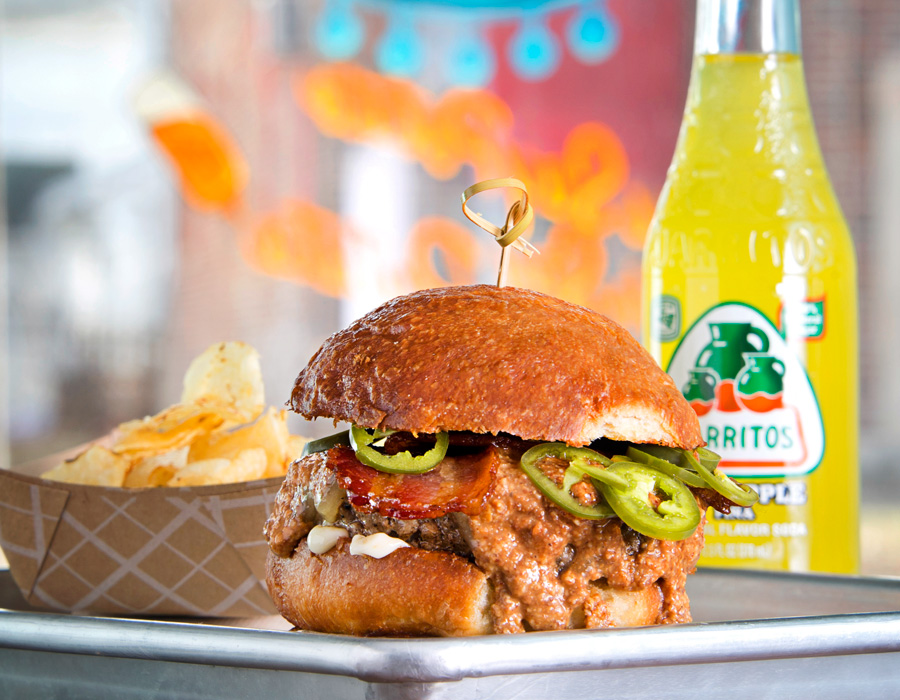 The building might be more than 80 years old, but its inside is staffed with 20-somethings who are having a blast serving up creative and tasty burgers. That’s thanks to 23-year-old Bo Gonzales, whose Bravas restaurant opened Dec. 2 next door to Wunderkammer Co. on Fairfield Avenue.
Folks familiar with the food truck scene probably know about the Bravas truck, which dispenses tasty hot dogs with unique toppings during the warmer months. Gonzales began his food-truck-to-restaurant adventure with a simple hot dog cart in 2011, inspired by his time in Chicago dining at the now-defunct Hot Doug’s gourmet hot dog shop.

“I really enjoyed the scene,” Gonzales said of Hot Doug’s. “They were doing one thing and doing it very well.”

When he returned to Fort Wayne, he “really missed the food trend of doing one thing.”
He was making tacos one night with some friends, and he had the idea of doing a food cart specializing in tacos. He became “obsessed” with the idea, and the concept “took over everything.”

He began researching the idea, but quickly realized that tacos required more preparation and storage space. (All those toppings! All those different kinds of meat!) So he decided to open his own gourmet hot dog cart. That first year, in 2011, he “lost a little weight” pushing his cart around downtown. He didn’t make any money, but he did build up a following, and the following year, he decided to “buckle down and run it like a real business.”

Success – and a food truck – followed. Gonzales and his crew began roaming the streets of Fort Wayne, serving up a variety of hot dogs, accompanied by his signature “bravas” sauce, a spicy mixture inspired by Gonzales’ father’s native Spain. Bravas sauce is a common condiment in Spain, he said, and his spin on the mixture is addictive.

Gonzales initially wanted to sell tapas-style dishes (small plates) that honored his forebears’ homeland, which is why the food truck has the word “tapas” painted on the side. The dish that proved most popular was his take on “patatas bravas.” (“Bravas” means “bold” in Spanish.) Cubed, fried potatoes drizzled with bravas sauce and garlic aioli proved popular, but his customers didn’t seem interested in other dishes.

“People really wanted the hot dogs,” Gonzales said. “We tried to run them both (hot dogs and tapas dishes), but people were just buying hot dogs.”

But it’s hard to make a living with a food truck in Northeast Indiana, when cold weather means people who would normally walk to a food truck stay bundled up inside. He’d been doing specialty “burger nights” with the food truck at places like The Brass Rail, and he knew his burgers were just as popular as the hot dogs, if not more so. At the end of the summer season in 2014, he decided to find a small space where he could open a burger joint. Thus, Bravas restaurant was born.

He found the Fairfield Avenue space formerly occupied by Giver’s Pizza, signed a lease in September and spent the next two months gutting the space and making it into a hip stop for burger lovers. His burgers come from a combination of meats that are cut and ground daily in house; the buns are baked fresh by Zinnia’s Bakehouse, and his menu changes seasonally. Three constant burgers stay on the chalkboard menu: The Classic, featuring lettuce, tomato, onion and jalapeño remoulade; the Bravas Burger, featuring chili, fries, bravas sauce and provolone cheese; and the PB, a burger with peanut butter, peppers and white cheddar. The truly unique Caramel Apple burger, sadly, only appears in the fall. Yes, you read that right: Gonzales invented a burger topped with bacon, pickled green apples, white cheddar and caramel sauce. It sounds weird, but it tastes heavenly. And vegetarians should stop by for his house-made veggie burgers, made with roasted mushrooms, kidney beans, tofu, beets and cashews, along with a special spice blend.

His inspiration for the burgers’ names (such as “Poutine on the Ritz,” which features gravy, fries and Wisconsin cheese curds) come from the animated television show “Bob’s Burgers.” He’s a big fan of the hapless Bob’s burger-making prowess.

For a guy who started out selling hot dogs from a small cart at 19 years old, to restaurateur by age 23, Gonzales seems a bit surprised at his success.

“I was pretty oblivious to how hard it is,” he admitted. And while he initially wanted to open his restaurant downtown to take advantage of the growth there, the South Side High School graduate said he also loves the 46807 area, and the success of Dan Swartz’s Wunderkammer Co. art gallery next door made him realize a market exists there for quality dining.

“It’s an awesome neighborhood,” he said. “There are a lot of people (here) who are really into Fort Wayne.”